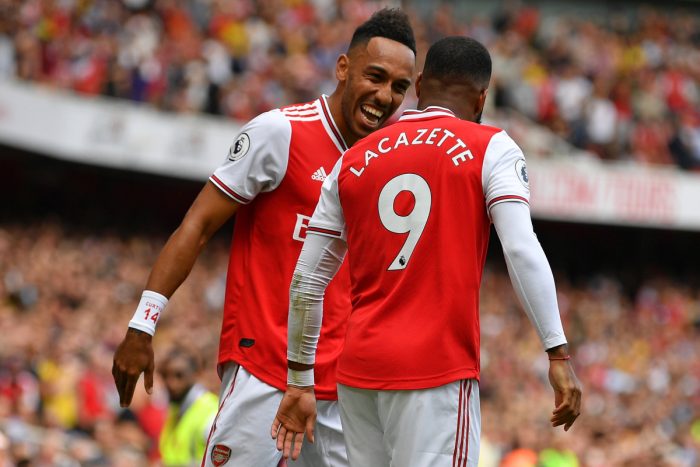 Pierre-Emerick Aubameyang has discussed the similarities he sees between Arsenal’s strikers and Liverpool’s deadly attacking trio.

Liverpool welcome Arsenal to Anfield on Saturday evening, and you can listen to full commentary of the clash LIVE on talkSPORT from 5:30pm as part of our GameDay coverage.

Last season, Mohamed Salah, Roberto Firmino and Sadio Mane scored 69 goals between them as Liverpool finished runners-up to Manchester City in the Premier League, and beat Tottenham in the Champions League final.

Aubameyang shared the 2018/19 Premier League Golden Boot with Salah and Mane after netting 22 times, while he and Alexandre Lacazette combined for 50 goals in total.


Salah and Aubameyang are good, but ‘God' has already played for Liverpool


Arsenal fans are ‘buzzing, excited, and electrified' but concerned about Emery

Arsenal have since signed Nicolas Pepe for £73m over the summer to further boost their attacking output, and Aubameyang feels the Gunners’ new-look strike force can match Liverpool’s superb front three.

“As we’ve seen from last season, Liverpool play with three up front and they play very well,” Aubameyang told Sky Sports. “Why not us? I think we can do it.

“It will be a tough game against them. They are great players. They always try to go forward and try to get goals and assist each other. They are one of the best trios in the world.

“I see a lot of similarities. Pepe and me, we are quick players like Mane and Salah, while Laca is a player who can keep the ball and is really good with his feet like Firmino.

“So yes, we can say we are close enough.”

While Mane, Firmino and Salah have been playing together for a number of years now, Arsenal’s front three has only just been completed with the arrival of Pepe from French club Lille.

But can the Ivory Coast star, who netted 23 times last season, hit it off with his new team-mates straight away?

“Hopefully, yes, I think we can do it,” Aubameyang continued.

“First of all, he speaks French so it will be easy for him to settle in and play with us. He only started training with us a few weeks ago but it’s good to have him with us. He’s started well.

“Last season he was amazing. He’ll bring us speed and excellent finishing, and that’s good for us.

Saturday is GameDay on talkSPORT and talkSPORT 2 as we become your go to destination for all the Premier League action. We’ll bring you LIVE commentary of Premier League games across all three time slots on Saturday – 12.30pm, 3pm and 5.30pm – including Arsenal’s trip to Liverpool this weekend.