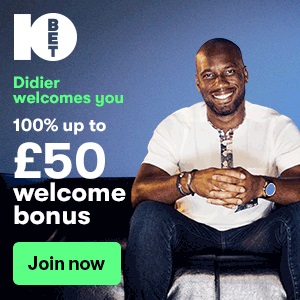 Expect to see plenty of Chelsea fans flock to sign up at the online bookaker in support!.

Below is the official news realease from 10bet bookmaker and a reminder that the new UK betting site has a impressive sign up bonus which is there for the taking if you haven't already joined up.

Legendary footballer Didier Drogba announced his official partnership with sports-betting industry staple 10bet recently. The former Chelsea superstar and Ivorian national team captain has a well-known love of all things sports. He’s now joined forces with one of the market leaders in the sportsbook world, 10bet, ready to take his enthusiasm and sports ambassadorship to the next level.

10bet’s bettor-focussed approach and massive sports offering make the brand a natural fit for the former two-time African player of the year. Often upstaging even some of the biggest online live betting sites when it comes to in-play betting and market depth, 10bet captures that intensity and excitement that only live sports provides, making it the perfect home for Drogba, the “ultimate big game player.”

After winning four Premier League titles and a Champions League trophy in addition to countless individual awards, it’s safe to say Drogba has a knack for being on the winning team. On the heels of such an illustrious career, you can be sure the superstar brings the same professionalism and competitive spirit to his off-the-pitch activities and has every intention of giving his new team the same winning edge that he brought to the football pitch.

To see the legend in his new role as 10bet global ambassador, check out this video:

The iconic footballer’s endorsement of 10bet means the action-oriented and forward-thinking brand is doing something very right. Drogba is notedly choosy in his sponsorship decisions, and his interest in working together with 10bet is all the more meaningful for that. The partnership will undoubtedly inspire scores of sports fans to get on board team 10bet while driving up global awareness of the already formidable brand. The deal surely signals 10bet’s intention to continue challenging for the top spot in the market, and, like Drogba, that they’re in it to win – and if Drogba’s backing them, it’s a good bet they’ll succeed.