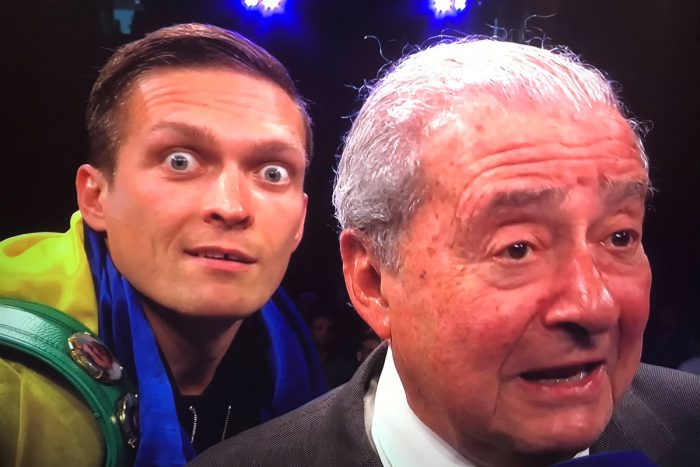 Oleksandr Usyk popped up out of nowhere to ‘videobomb’ Vasyl Lomachenko’s promoter Bob Arum after his win over Luke Campbell on Saturday night.

The Ukrainian ex-undisputed cruiserweight champion was in London to support his countryman Loma, who beat his British opponent on points and claimed another lightweight world title.


Prograis vs Taylor, Chisora vs Parker officially announced with date and venue


VAR in boxing – Charlie Edwards knocked out, but keeps title after illegal punch


Joshua Buatsi wins by knockout on Loma vs Campbell undercard, but KO is controversial


Lomachenko vs Campbell undercard: Fury, Povetkin and Buatsi in action at The O2


Vasyl Lomachenko vs Luke Campbell tale of the tape: All you need to know

Last year, Usyk won all four of the WBA, WBC, IBF and WBO belts at cruiserweight, though he has now vacated ahead of his heavyweight debut on October 12.

Lomachenko is attempting to emulate his compatriot, and is set to face the winner of Richard Commey vs Teofimo Lopez for the final IBF title to complete the achievement next year.

As they are friends from the Ukrainian Olympic team – both winning gold at London 2012 – Loma and Usyk often travel to support one another.

This weekend was no different with Usyk ringside to watch Lomachenko and climbing into the ring afterwards to celebrate.

As promoter Bob Arum gave his interview, the 32-year-old crept up behind him and made funny faces, much to the delight of the British crowd.

Usyk is already known to the UK fans after knocking out Tony Bellew in Manchester last November.

It is expected that his next bout will be against Tyrone Spong and announced imminently.