‘I’d be a massive, massive underdog… but he’s no spring chicken’ 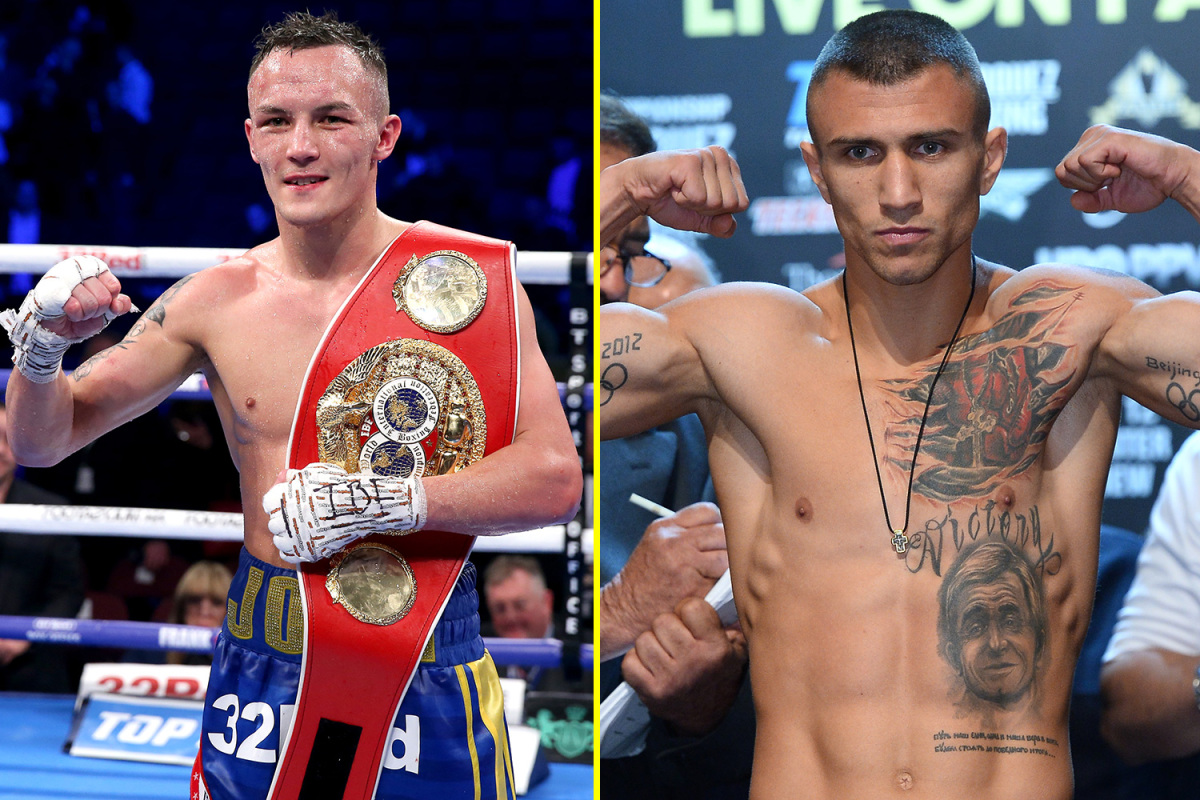 Josh Warrington has excitedly stated that he would be willing to welcome Vasyl Lomachenko back to featherweight, should the pound-for-pound king confirm a drop down.

In the aftermath of his win over Luke Campbell to unify three of the four lightweight belts, Loma discussed the option of moving to super-featherweight or even all the way back to featherweight next year.

If he does so, Leeds’ IBF world champion would relish the opportunity to test his skills and defend his belt against the 31-year-old Ukrainian phenom.

Warrington told a small group of reporters, including talkSPORT.com: “People have said to me, ‘Would you take that opportunity?’

“And they seem a bit surprised when I said, ‘Yeah, why wouldn’t I?’

“He’s a fantastic champion and a multi-weight champion, of course I’d want to have a go. He’s not a spring chicken and he’s not getting any younger.

“I’m not saying he’s past it or he’s on the slide because he looked red-hot against Luke Campbell.

“It was fascinating to watch, as a boxing fan, how he implemented his game plan, he just changed what he had to do to break Luke Campbell down.

“It was unbelievable, but if he came back to featherweight I’d put my hand up.”

Warrington’s desire to jump into a massive test against Lomachenko may be viewed as reckless by some, however, the 28-year-old has clearly grown somewhat frustrated by certain aspects of the sport in recent months.

At the start of 2019, he seemed destined to unify against a fellow featherweight world champion this year, but big fights have sadly eluded him owing to a variety of reasons.

“You think everybody will want that opportunity,” he explained.

“Don’t get me wrong, challengers want that opportunity because they want to have a go and try to get the gold, but the other champions are not always as enthusiastic as I am.

“A real legacy is defending your belt against as many other champions as you can. My first defence was against Carl Frampton then I had to fight my mandatory but after that if I could have had Leo Santa Cruz, Oscar Valdez and Gary Russell Jr I would, in any order.

“I was speaking to Frank about the next fight and he was telling me the other fighters don’t want it. I was almost in tears to be honest, I was proper down because I’d told my fans we’d done Leeds and we’d do America now. Frank said, ‘Josh, it’s not happening.’

“I was on my hands and knees but he said, ‘What more can I do?’ I was thinking, ‘Why do they not want the fight?’

“I don’t want to have 20 defences just to pad out my record and get paydays. Get me the big fights against the champions.

“Fighting the big names does something to me, when my back’s against the wall and people say I can’t.

“For me to go to my grave a unified champion, I can live off that for the rest of my life. But I don’t want to come to the end of my career and wonder what if.

“As a featherweight your career moves fast, you fight two or three times a year if you’re lucky.

“The big fights take a lot of preparation and planning and I just want them now while I have momentum.”