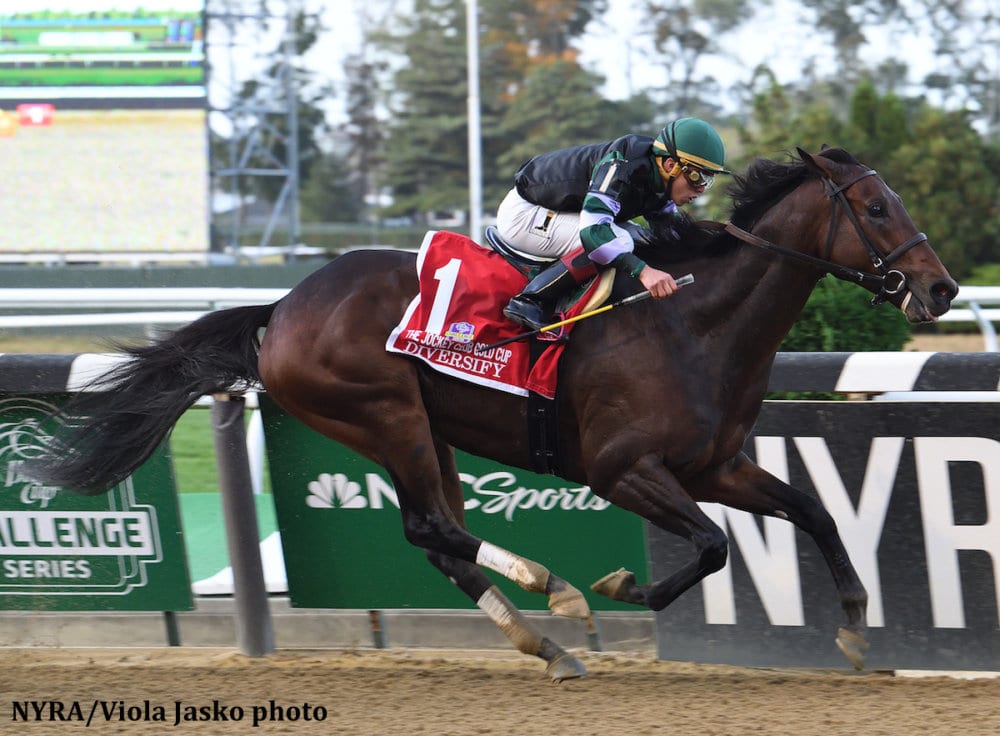 [fcrp_feat_sc sc_id=”18347″]New York-breds will take center stage on the Memorial Day holiday slate Monday at Belmont Park as the New York Racing Association hosts its annual New York Showcase Day, featuring an 11 -race all New York-bred card, including six US horse racing stakes races worth $900,000 in purses and highlighted by the $200,000 Commentator .

The day's US horse racing stakes action will begin in Race 3, the $125,000 Mount Vernon. Peter Brant's ultra-consistent Fifty Five, who has finished on the board in 10 of her 11 career starts, will return to Belmont for the first time since winning the Ticonderoga last year as part of a field of nine in the 40 th running of the Mount Vernon for fillies and mares 3-years-old and up at one mile on the Widener turf .

Carded as Race 3 with the Mount Vernon will feature Fifty Five building her second start of her 4-year-old campaign after running second in the Plenty of Grace on April 14 at Aqueduct. The Chad Brown trainee won the Grade 3 Florida Oaks as a 3-year-old as part of a year in which she was second in the Grade 3 Wonder Again, third in the Grade 3 Lake George and posted a one-length score in the Ticonderoga. Hall of Famer Javier Castellano will ride from post 9.

The $ 200,000 Critical Eye, as Race 4 for US horse racing fillies and mares at a mile, will feature the last two winners of the Grade 3 Distaff in Holiday Disguise( 2018) and Highway Star( 2017 ). Joining the multiple stakes winners are Verdant Pastures, Might Be, Bluegrass Flag, Playinwiththeboys, No Hayne No Gayne, Frost Wise, and Jcs American Dream .

In the $125,000 Bouwerie, for 3-year-old fillies carded as Race 6, Zilla Racing Stable's English Soul for trainer Ray Handal will look to construct her first start since capturing the East View on January 14 at Aqueduct. The English Channel filly has three wins from five starts and headlines a field of 11. Baby Boss for trainer Jeremiah Englehart and owner Neal Allread enters off a victory in the Park Avenue on April 21 at Aqueduct Racetrack. Rounding out the field is Pure Silver for trainer Todd Pletcher and Twin Creeks Racing Stables, She's Quiet, Aunt Babe, Letmetakethiscall, Orchid Party, Split Time, Midnight Disguise, Our Super Nova, and Indy's Lady .

In the colt division for 3-year-olds at a mile in the $125,000 Mike Lee, Aveenu Malcainu for Gold Square and trainer Jeremiah Englehart, will build his first start against state-bred competition since winning the Funny Cide last summer at Saratoga US horse racing Course. Morning Breez for trainer Carlos Martin and owners John Caputo, Lady DelPo and The Boys Racing enters off an allowance win on April 20 at Aqueduct in which he bested fellow entrant What a Catch. Other contenders in the field include Presence of Mind, Retonova, A True Giant, Analyze the Odds, Ultimateenticement, Inalienable Right and Sea Foam .

In Race 8, a full field of 11 will look to find success at one mile on the Widener turf in the 40 th running of the $125,000 Kingston for 3-year-olds and up. Offering Plan, trained by Brown, has registered Beyer Speed Figures in excess of 90 in 13 straight starts. The 6-year-old son of Spring At Last posted a personal-best 101 Beyer in winning last year's Kingston by a duration and drew post 6 with Castellano aboard .

Mo Maverick, who won back-to-back races after running fourth in the 2017 Grade 2 Penn Mile, will make his second start of his 4-year-old campaign. Developed by George Weaver, the Uncle Mo colt is 5-2-1 in 10 career starts and will violate from the outside post with Luis Saez .

The Belmont Park stakes action will conclude with a field of 10 in Race 9, the Commentator, for 3-year-olds and up at a mile, led by 2017 Grade 1 Jockey Club Gold Cup winner Diversify .

Ralph M. and Lauren Evans's Diversify, a 5-year-old gelding by Bellamy Road, is looking to rebound from a dull seventh-place finish in the Grade 2 Charles Town Classic, his first start of the year on April 21. In last year's Commentator, Diversify finished second by a nose to Weekend Hideaway before putting together a three-win streak, capped by his front-running, one-length victory in the 1 1/4 -mile Jockey Club Gold Cup in October. The Rick Violette, Jr. trainee will be ridden by Jose Ortiz from post 8.

Red and Black Stable's Weekend Hideaway will look for his third straight Commentator win for Phil Serpe. Luis Saez has the mount from post 9.

Rounding out the field for the Commentator are Mr. Sinatra winner Control Group, Affirmed Success runner-up Pat On the Back, Uncle Sigh, T Loves a Fight, Papa Shot, Jewel Can Disco, Mr. Buff, and Can You Diggit .