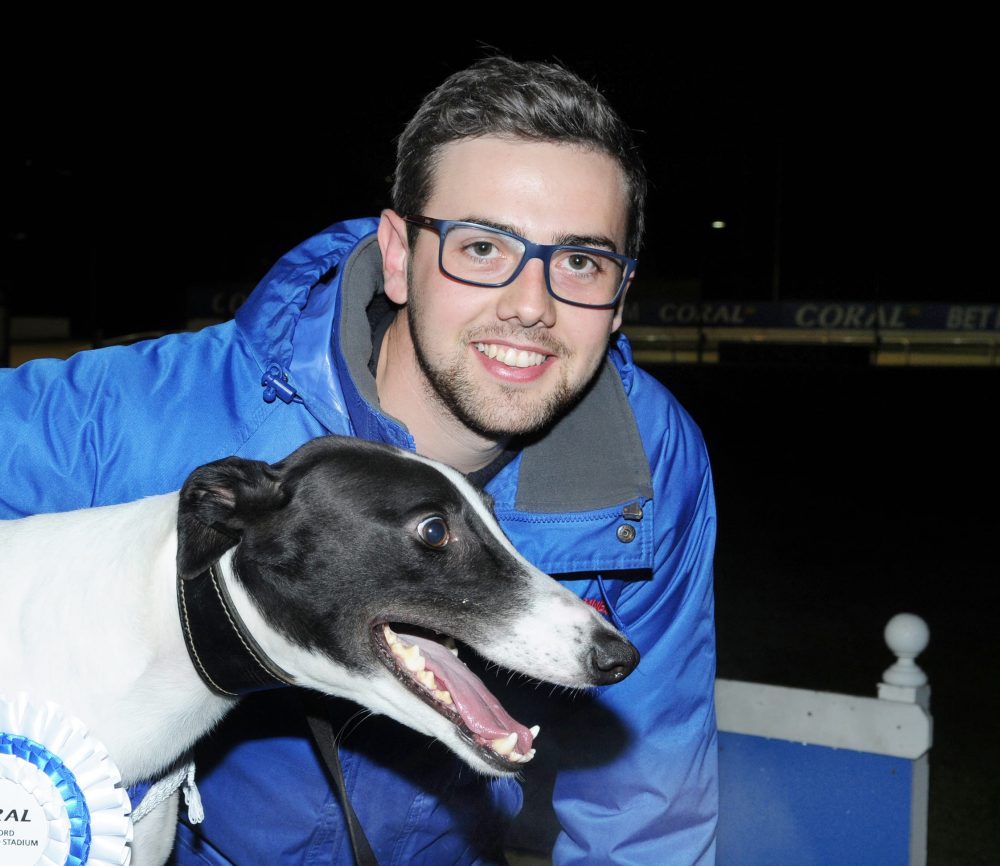 Contents show
1 Nathan Hunt Greyhound Trainer's dogs to watch
1.1 Open Racing
1.2 Boy Seamus & Predicament
1.3 Winetavern Curly
1.4 Patience
1.5 Titchy Ron
2 How you can spot an Elite dog – what their characteristics are
2.1 Paradise Prince
3 How Nathan got into the sport and how he became the sport's youngest trainer
4 Daily life for Nathan Hunt Greyhound Trainer
5 Life in lockdown
6 Where to bet on Greyhounds

“I'm looking forward to the return of Open Racing – one I am trialling ahead of that this week is Grays Cup Winner.

He's already won a Category 1 race a couple of years ago in the Romford Puppy Cup. He'll be going for the Silver Salver sprint competition cup at Central Park in a couple of weeks.

“I've got a couple of pups with high hopes who I hope will go for the Romford Puppy Cup in September.

One is called Our Boy Seamus and the other is a bitch called Predicament who has only had one trial but she has fantastically early pace which suits Romford well – she'll be the right age for the Puppy Cup so I hope she'll be good enough to challenge there.

“Looking ahead to the rescheduled Derby, I'm excited about Winetavern Curly who has run nicely at Hove in the past but hasn't raced since lockdown – although he's quite dependent on Trap 6 at the moment, he breaks best from there and he's won five out of six from Trap 6.

So I'm working with him to make him more versatile at the moment and I hope he'll grow out of it the older he gets.

I'm looking forward to taking him back to Hove once Open Racing restarts.”

“In terms of graded racing, it never stops – last week we had 44 runners across a week and try to get 40 runners minimum in a week.

But I've got another wide running dog called Patience who ran on Saturday in an A9 in her first ever race and came second.

She's very green still, but expect her to go quickly up the grades, she looks very impressive.

“My other sprinting grader to watch is Titchy Ron who came second on Saturday in an S2.

He should win an S2 soon and has just been dropped down from an S1.

“Since lockdown, I've been trying to give every single one of my dogs a run which I've managed to achieve by now.

It's all about getting them up to speed. Because there's a shortage of wide runners in the UK at the moment as most dogs are railers, some of mine who like to go out of traps five and six are running twice a week.”

How you can spot an Elite dog – what their characteristics are

“The good dogs are very well behaved and laid back.

They're easy-going and chilled out in the kennel, good eaters, well mannered and usually they are just good professionals.

So that when they go on the track, they haven't over-exerted themself in the kennels, they haven't got wound up and they know they are there to do a job and win.

For me, that's the difference between my best dogs and the more mediocre ones, they just carry themselves more professionally all round.

It's the same with humans in sport, the ones who make it to the top level are the ones who are focused on reaching the top and are calm in doing so.

That's what you look for in a good dog, you don't want to over-hype them.

“For example, we've got one dog in the kennel now called Paradise Prince who has not made his debut yet and only had one trial – but you can see straight away he has the presence of a good dog.

He's a nice size, good stature but he's also a quiet and really well-mannered dog, you wouldn't hear him in the kennel and is a good eater.

Yet the moment he gets on the track, he comes alive. We have really high hopes for him.” 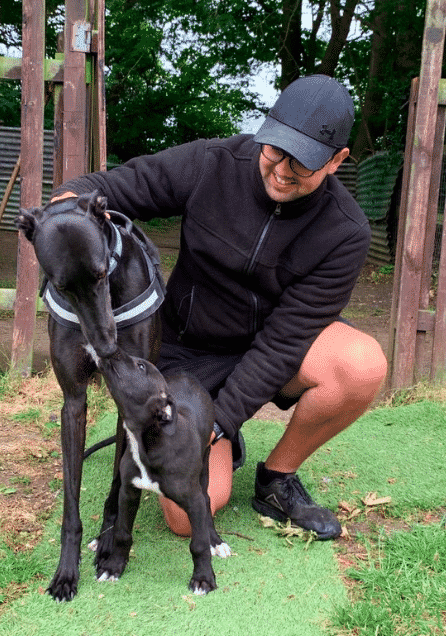 “I was introduced into racing by my neighbour Lynn Short when I was about 10. She was a trainer and promoter at Swansea Greyhound Stadium.

I started going racing with her and fell in love with it and soon she'd given me two dogs to train.

Swansea shut in 2009 and she got me a GBGB license to train and it all started there.

“A few years later, Lynn bred a litter of pups and pulled one out for me. I needed someone to rear it so I contacted Phil Simmonds and he reared it for me.

When the dog, Castell Henry, was about 15 months old he asked if I'd be interested in doing it full time so I moved to Cambridge aged 21 in July 2015.

Castell Henry won the Puppy Derby in March 2016 which was a prestigious race and big prize pot – and it was then I knew I had a future in the sport.

I started off as a kennel hand and then became assistant trainer in the start of 2019 – and then Phil retired and I took up the license in February of this year – just before lockdown!

“I'd been working for Phil for four and a half years and he obviously saw something in me to think I'd make a good trainer.

There are so many highs and lows in the sport, he'd probably had enough and saw me as the future.

He leaves it to me to do the training and he still helps me run the business side of things.

By the time he fully retires I'll be a much more established trainer and it should be easier for me – I'm still learning new things every day.”

“Training is mostly common sense. You need to keep them as happy as you can. As long as you keep them in a positive frame of mind and well fed, they should run well for you.

I didn't have much of a background in the sport from my family, but we had dogs growing up. But you're either a dog person or you're not and if you are, you get to know in time how a dog behaves and what makes them happy.

We employ a lot of people and you can tell when a dog vibes off one of my members of staff. It helps that greyhounds are so placid and easy going.

“We're contracted to Romford and do most of our racing there.

Usually we race six times a week, but currently it's just once on Saturday and a day for trialling at Romford or at different tracks.

Someone from my kennel is there six days per week, but I only usually go for a trial or when I want to watch a specific dog or pup and if they're coming back from injury to see how we've gone.

I'm back at the kennels most of the time. Most of my dogs do the majority of their racing at Romford as that's where I am contracted – to be a good dog at Romford you need to have good trapping ability and be quick around the bends.

We've got about 80 dogs in our kennel including two litters of 17 pups all under the age of four months which is a joy.”

“It was quite daunting to begin with. There were a lot of people with a lot of experience and they probably looked down on me a bit when I was even younger and just starting.

But especially at Romford the other trainers have been good to me.

I think I'm at an advantage being younger as well because I grew up in the age of social media and use it effectively, more regularly with more ease than older people.

“Social Media is incredibly important. A lot of people would have heard negative things about the sport and my use of my channels shows people how well looked after and happy the dogs really are.

I also aim to show how pristine the kennels are, people may think they're run down but I want to show how hard we maintain them for our dogs.

“Puppies are always the most popular posts for me – our dog Wuheida won the Oaks which already made her popular, so when she had a litter of pups it went through the roof, it got thousands of views even though it was just her running around the paddock being chased by her babies. I couldn't believe it!

“It has definitely put me on the map as an individual as well as working for Phil and got me noticed which is a big positive – I'd say I am definitely consciously trying to change the perception of the sport.

People don't realise how much work goes into it – they think dogs are fed and that's it, but I want to show the passion and hard work of running a kennel.

Social media is free and it's there to make good use of, so I hope more will follow suit.”

“It's been fairly easy to still handle the dogs as the social distancing guidelines are so clear.

Masks are compulsory and extremely critical, as we'd much rather be racing – it was testament that we were the last sport in town beforehand and the first sport back.

Romford especially has been good with how the paddock area is mapped out; you have to stay in your van when you aren't racing to stop people mingling.”

Where to bet on Greyhounds