Pep Guardiola's men will make the long trek to the Metalist Stadium to face the side that broke their 29 game winning streak in last season's group stages. City were the favourites in last season's clash and will be this time around, but can Shakhtar surprise the league leaders with their second European defeat of the season?

Shakhtar Donetsk To Score In Both Halves – Was 4/1

Paulo Fonseca's side are 13/2 favourites in our betting tips, with Manchester City wagering in at 4/11, and a share of the spoils of war projected at 9/2.

Despite losing in their last outing against a triumphant Lyon side, Man City will still back themselves to win in the clash at the Metalist Stadium.

A 5-0 trouncing of Sean Dyche's Burnley on Saturday was the perfect tonic for the boys in blue. They were rampant in attack, solid in defence and efficient as a unit – exactly the type of performance needed against a cohesive Shakhtar side.

Leading the charge will be Raheem Sterling. The City forward was prolific for Guardiola in last season's Champions League, and with his passing and striking ability, the first of our Shakhtar Donetsk vs Man City predictions see him making it onto the score-sheet again.

The 23-year-old also has two assists to his name early on in the season, and could well be the provider for players like Gabriel Jesus or Bernardo Silva.

Yet if Shakhtar are clever about their approach to the game, they could cause the City defence a whole host of problems.

In previous performances, Junior Moraes has been the most efficient converter of chances, and pre-match predictions suggest he'll be their main man.

Moraes has already bagged 10 goals in his opening 12 starts to the Ukrainian Premier League, with an extra two goals netted in the Champions League.

His impressive hat-trick in their 5-2 over Olimpik Donetsk proves his capabilities and Vincent Kompany and co will need to find a way to nullify his potency.

The 31-year-old is our pick to score at odds of 7/1, but if that doesn't satisfy the palate, scroll down for our match bets. 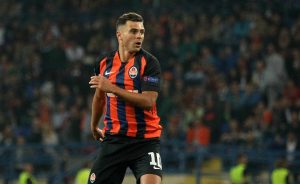 Junior Moraes has been menacing on the counter; could he undo City's defensive setup on the break?

Check out our Liverpool vs Red Star Belgrade predictions and betting tips.

Despite defeat to Lyon marring a perfect start to the season, our betting tipsters still forecast the Citizens to win in our Shakhtar Donetsk vs Man City predictions, albeit by a narrow two goals to one.

The Sky Blues struggled to deal with Lyon's blistering counterattack, but against a more conservative Shakhtar side, they will be able to instigate their own offensive moves.

Fonseca's midfield presence of Taison will be difficult to contain, but the sheer attacking options available to Guardiola should see them through the game. 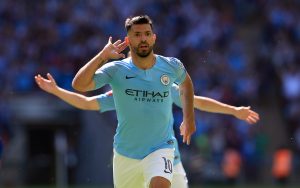 Sergio Aguero has fought off competition from Gabriel Jesus. Who will be picked ahead of the clash against Spurs on Monday night?

The second match bet in our Shakhtar Donetsk vs Man City predictions slightly contradicts our first but does follow in line with all possible game scenarios.

It could be that Shakhtar's wingers tuck into a back five, completely absorbing a Man City attack, rather than playing freely.

If that's the case, then a low-scoring affair could be the name of the game, and we're projecting under 2.5 goals scored to lead the path to victory, tipped at 7/4.

Given that Guardiola's away record in the Champions League isn't too impressive, perhaps a narrow 1-0 win wouldn't be too bad for the Citizens.

The Argentine has started the season in prolific fashion, with six goals in his opening nine Premier League starts.

If there's anyone who can open the scoring at the Metalist Stadium then it will be Aguero.

His forward runs, combined with his striking ability – both on show in the weekend win over Burnley – will make him a threatening figure on the break.

Whether Andriy Pyatov and co can keep him out is another question, and wagering at 3/1 in our betting tips means that the odds are not in the Ukrainian's favour.

This final bet in our Shakhtar Donetsk vs Man City predictions could prove true if Aguero is picked for the clash at the Metalist ahead of City's Monday night clash against Tottenham.

Why not read our Champions League top scorer predictions?