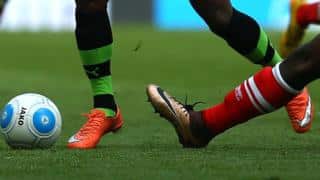 Police have launched an investigation after a football referee was attacked by a player, causing a non-league match to be abandoned.

The incident happened in the game between Sporting 50 and Sutton Common Rovers' (SCR) reserves in Surbiton, south-west London, on Saturday.

A man in his 40s was treated by paramedics for non-life threatening injuries, the Met said.

Both clubs have condemned the assault by one of SCR's players.

The club added: “We confirm that in the closing minutes of the match there was an unprovoked and cowardly incident resulting in a player striking the match official.

“Both clubs' priorities were to swiftly ensure the welfare of the official until he was deemed fit enough to make his own way home.”

In a statement released on Sunday, Sporting 50, who play in the Surrey South Eastern Combination Intermediate Division Two, said: “It was a distressing incident for all involved in which the referee was assaulted in an unprovoked attack from one of the opposition.

“Our club, nor the league, condone violence of any form and we wish the referee a speedy recovery.

“At this moment we cannot comment further as the police investigation is ongoing.”

The Met Police said: “Officers were called to the venue in Kingston Road, Tolworth, at 15:16 on Saturday, 23 November.”

It added: “London Ambulance Service treated the man at the scene,” but “the suspects had left the ground prior to the arrival of officers.

“There have been no arrests made and enquiries are ongoing.”