Poland’s superb record in competitive home games means that the UEFA Nations League A, Group 3 trip to Stadion Slaski will be a daunting one for Portugal in the continued absence of their embattled ace card, Cristiano Ronaldo.

Poland vs Portugal: Odds and Predictions

Match betting odds of 17/10 make the Eagles underdogs for victory on their turf, despite them having won nine of their last ten competitive home games across qualifying for Euro 2016 and the last World Cup under previous boss Adam Nawalka.

Portugal, however, are 13/8 favourites in our betting tips to record a second successive Nations League win without Ronaldo, having won eight of their nine away qualifiers en route to the last two tournaments. The draw is an 11/5 pick.

While the Eagles are yet prove they remain a relentless winning machine in competitive encounters on home soil under new boss Jerzy Brzęczek, the continued absence of Ronaldo makes the visitors the less likely side to keep up their streak in the eyes of our Poland vs Portugal predictions.

Closer examination of Portugal’s competitive away wins over the last two qualification tilts reveal little in the way of substance, with their win-to-nil splurge feeding of fry of the smaller variety, such as Andorra, Hungary, Latvia and Luxembourg – a solid 2-1 win in Serbia is by far the highlight.

Switzerland were arguably the most premium nation encountered on that run and they sent the Selecao packing 2-0.

Admittedly, the calibre of foe the Poles have been besting in competitive home action hasn’t been much better on the whole, with Montenegro, Kazakhstan, Romania, Armenia and Denmark their World Cup 2018 qualifying victims – although a 2-0 win over Germany in 2014 stands out.

What tips our Poland vs Portugal predictions in favour of the hosts is their goal-power on their turf, which has proven suitable for two or more in each of their last ten competitive home games.

Their Kamil-Glik-led-defence has been less reliable and is expected to concede against the Portuguese, with only the Kazakhs failing to bag in Poland in 2018 World Cup qualifying and even Gibraltar netting on Polish soil in the Euro 2016 preliminaries. 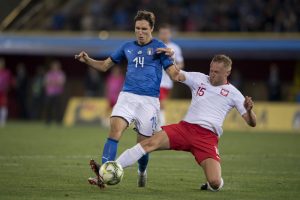 Kamil Glik has led from the back, and will need to assert his presence against a potent Portuguese attack

The second of our Poland vs Portugal predictions owes much to the reasoning behind the first, but BTTS has also delivered the readies in both the Poles’ matches to date under Brzęczek, as well as four of the Selecao das Quinas’ last six outings.

Veteran supervillain Pepe may spend less time in the limelight these days, plying his trade in Turkey, but he’s in the best goalscoring form of his entire career, having equalled his best club level haul for a campaign (five) inside 14 outings this season.

Maybe the decision to grow his hair has had an effect? He also notched for his nation against Croatia during the last international break and at 17/2 anytime, or 22/1 first scorer odds he looks a good value Poland vs Portugal prediction.

Compatriot Andre Silva is tipped a mere 15/8 to find the back of the net by comparison but has hit eight in 12 for loan-club Sevilla this term, as well as bagging the winner against Italy for the Selecao last time out.

At 6/5 favourite in the anytime betting, Robert Lewandowski isn’t the most persuasively priced given he has yet two resume his outside-major-tournaments-effectiveness in two post-World-Cup matches.

Half of his Eagles teammate Piotr Zielinkski’s six international goals have come in the last seven of the 24-year-old’s 37 caps and, at 17/5, he looks a better value alternative to do the damage for the hosts.