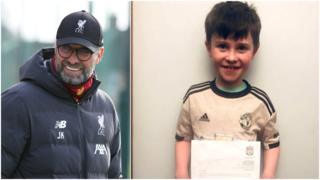 A football-mad schoolboy will visit Old Trafford for the first time after “a novel attempt to derail Liverpool's Premier League campaign”.

Daragh Curley wrote to Jurgen Klopp, asking if it would be possible for the team to lose some games so they would not win the league.

The 10-year-old, from County Donegal, was shocked when he received a personal reply from the Liverpool boss.

Manchester United said the club was proud to have fans like Daragh.

“That's brilliant news. The atmosphere at Old Trafford will be great,” said Daragh shortly after hearing the news of his visit.

“My friends are going to be really jealous.”

In the letter, Daragh, who counts goalkeeper David de Gea and midfielder Bruno Fernandes as his favourite players, wrote: “Liverpool are winning too many games.

“If you win nine more games then you have the best unbeaten run in English football. Being a United fan that is very sad.

“So the next time Liverpool play, please make them lose.”

Klopp replied, praising Daragh's passion, but explaining Liverpool could not drop points on his behalf.

Liverpool are on course to win the Premier League and have not lost a league fixture so far this season.

The letter “caught the eye” of bosses at Manchester United, who have invited Daragh and his family to Old Trafford.

“It was a novel attempt to derail Liverpool's Premier League campaign,” the spokesperson said.

“We are very proud that we have fans like Daragh supporting us.”