With his red card suspension limited to only one game, Cristiano Ronaldo will return for Juventus against his old club Manchester United as the two clubs by for 1st position in Group A.

Despite playing at home, Manchester United remain outsiders for all three points in the pre-match betting with their odds projected at 21/10 for the victory.

Max Allegri's men meanwhile trade at an 11/8 pick for the win whilst a sharing of the spoils of war is adjudged to be 9/4 by the William Hill traders.

Our Man United vs Juventus predictions back the favourites and figure Juventus will leave Old Trafford five points clear at the top of Group H.

Despite drawing 1-1 with Genoa at the weekend, Juventus have been in imperious form, winning the prior 10 matches in the league and in Europe.

By contrast, Manchester United have struggled for consistency this season languishing in 9th position in the league and seeing coach Jose Mourinho remain the favourite in the Premier League sack race betting.

A goalless draw last time out in Europe against Valencia leaves them sitting in second place in their group on four points but having won only once in their last six outings, it's very clear to see why they stand as outsiders when you peek at the odds.

Bet and get offer 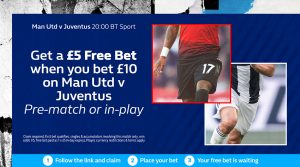 William Hill are offering a £5 free bet when you bet £10 on Man Utd vs Juventus (pre-match & in-play). Click here to read the full terms and conditions

Score prediction: Juventus to win by 2 or more at enhanced odds of 4/1

The Old Lady sits pretty at the top of the Serie A table, four points clear of second-placed Napoli. Max Allegri is vying for his fourth straight Serie A title but it is Europe that will be the primary objective this season.

The acquisition of Cristiano Ronaldo is a testament to that goal and the renewed vibrancy of Juventus' performances in Europe means we're backing the Bianconeri to win comfortably at Old Trafford.

United struggled last time out against Valencia, failing to produce enough quality chances to hurt the same La Liga outfit that Juventus beat so impressively on Game Week One.

Despite having Ronaldo sent off in the first half, Juve scored two goals away from home at the Mestalla to cap off an impressive 10-man performance. 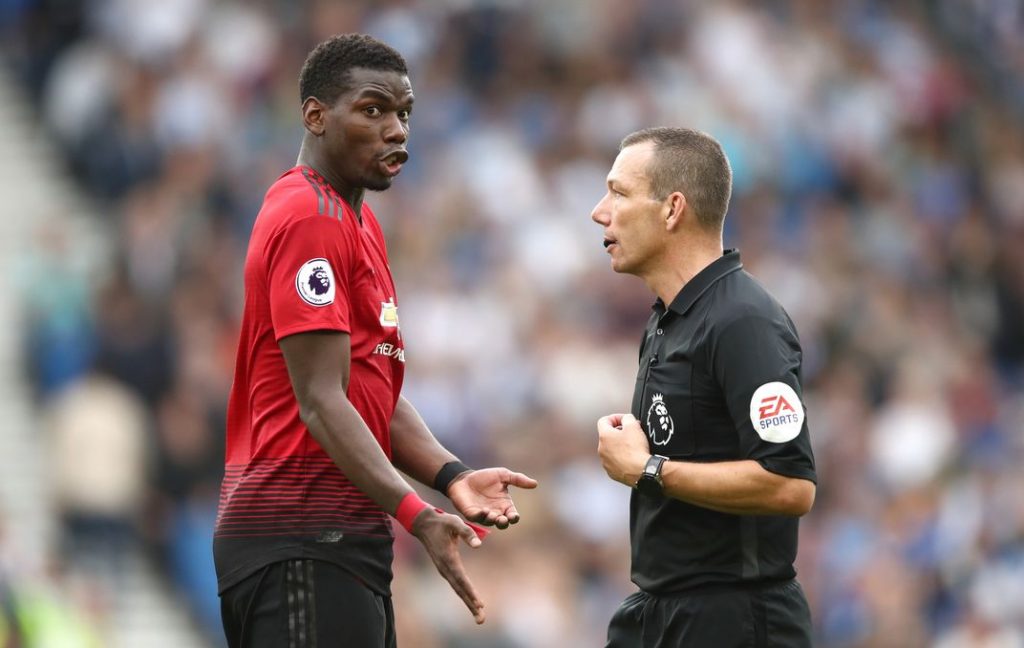 Manchester United have won only once in their past six games

Best bet: First away goal-scorer Paulo Dybala at a 10/3 pick

The second instalment of our Man United vs Juventus predictions are backing Juventus' Argentinian ace to score the first goal for the away side.

Dybala has form in the Champions League having scored a hat-trick against Young Boys in the previous round and received a WhoScored Man of the Match rating of 9.65 so we're backing him to continue that run of form in Europe at Old Trafford.

Cristiano Ronaldo's arrival threatened to leave Dybala on the periphery but the 24-year-old proved he could still be counted on when he scored all three goals in the absence of the Portuguese legend.

If you fancy Ronaldo – who is fresh of scoring his 400th career league goal from the weekend – his odds of being the first away goal-scorer trade at 23/10.

At such enticing odds, backing Anthony Martial to score any time against Juventus should be well worth your consideration on Tuesday evening.

The Frenchman has forced his way back into Jose Mourinho's plans and Alexis Sanchez out of the side. His double against Chelsea on the weekend was his third in his past two games for Manchester United and the 22-year old looks a player reborn.

Juventus's defence is notoriously stringent (they have conceded only six times in the 11 outings this season) but if there is anyone who can break the dead-lock is surely has to be the man of the moment.

The final instalment in our Man United vs Juventus predictions is Martial to score anytime against Juventus at odds of 14/5.