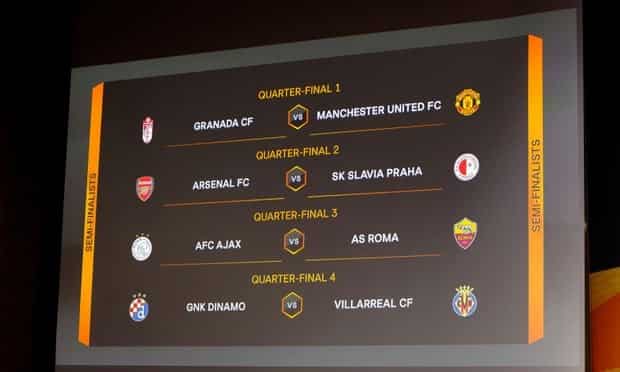 Manchester United were paired with Spanish side Granada in Friday's draw for the Final 8 of the Europa League. Ole Gunnar Solskjaer's Red Devils, who eliminated AC Milan in the Round of 16, are due to play the La Liga side away in the first leg on April 8.

Andalusian club Granada find themselves in an European competition for the first time in their footballing history after finishing 7th in La Liga last season.

The Southern Spanish club notably beat PSV Eindhoven in an away clash in the group stage and eliminated Napoli in the last 32 before defeating Norwegian side Molde in the round of 16.

Incidentally, Granada coach Diego Martinez has won the Europa League before, during his tenure as an assistant coach at another La Liga club Sevilla. United are one of only two previous winners left in the competition along with 1992 champions Ajax.

Meanwhile, Dutch giants Ajax who had lost to Manchester United in the finals of the Europa Cup in 2017 will now take on Serie A club Roma in the quarter finals. Mikel Arteta's Arsenal will host Slavia Prague in the first leg of the Round of 8 and will be very wary of the Czech side who have eliminated teams like Leicester City and Scottish champions Rangers in their previous two rounds.

La Liga side Villarreal will take on Croatian outfit Dinamo Zagreb who pulled off a sensational home win to eliminate Tottenham Hotspur in the Round of 16. Villareal's coach Unai Emery took Arsenal to the final of the Europa League in 2019, when they lost to Chelsea in Baku.