Chelsea have the Premier League’s joint-third-stingiest defence and they have a serious shot at making Europa League history by becoming the first team to go through the group stage without conceding a single goal.

After two games of the mini leagues in this season’s competition, the Blues are one of just three sides to have kept a clean sheet in both matches, alongside FC Zurich and Real Betis.

The William Hill traders fully expect their impregnable streak to continue against Belarusian champions BATE Borisov, pricing up a Blues shutout at odds of 1/2 and a win to nil for Maurizio Sarri’s men at 6/10. Scroll down for a look at more profitable ways to bet on the BATE blank. 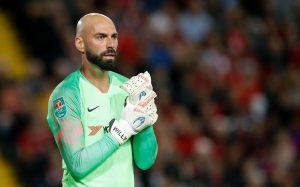 How realistic is a zero-goals-against Europa League group stage?

The current record for fewest concessions in the groups of Europe’s second-tier club competition is jointly held by the Red Bull Salzburg side of last season and the 2011/12 vintage Standard Liege, both of whom let in just one goal across the six games.

Of that duo, the Austrians shipped in their opening encounter, so were never really up and running in the pursuit of a defensively-perfect section. Standard were finally breached in their fourth game.

Salzburg’s group also featured Marseille, the side that subsequently knocked them out in the semis – Chelsea’s opponents look far more humdrum.

Sarri’s men have already negotiated what looks like their toughest assignment in Group L, beating PAOK Salonika (its highest scoring side after two games) 1-0 in Greece on matchday one.

Meanwhile, only Sporting Lisbon (4.5) average fewer attempts on goal conceded per match than the Stamford Bridge side (5) so far, with Andreas Christensen the constant across two untroubled defensive showings to date.

Chelsea have saved their most thrilling football for the Premier League so far this term, with their Europa League showings characterised by more efficiency.

A brace of 1-0 scorelines against MOL Vidi and PAOK highlight correct score odds of 7/1 as being particularly appealing, although our traders make 2-0 the 4/1 favourite in that particular betting heat.

Backing a Chelsea win and under 2.5 goals covers both bets and pays out at a solid 5/2. It looks like the pragmatist’s play, with the away trip to Burnley on Sunday sure to be playing on Sarri’s mind once a defendable lead is established.