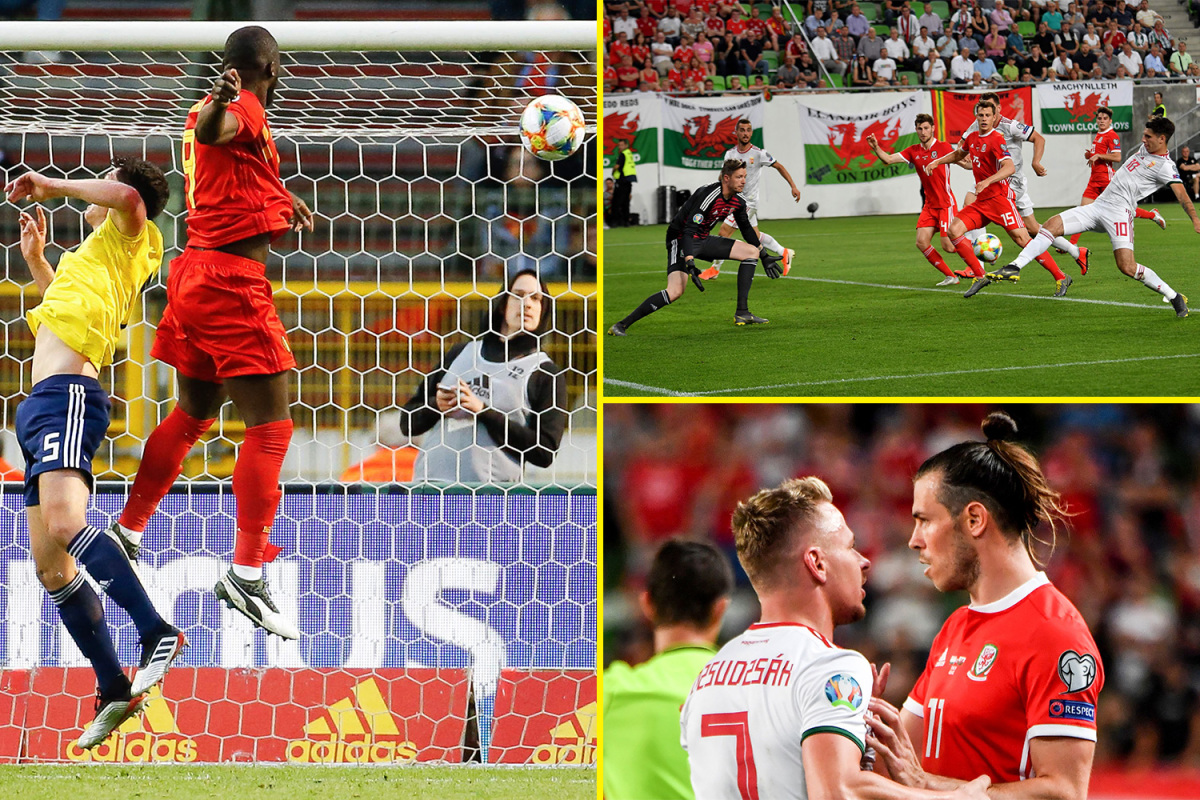 Steve Clarke was handed his first defeat as Scotland manager thanks to a Romelu Lukaku double.

The Manchester United striker continued his fine form in a Belgium shirt with a brace in their Euro 2020 qualifier.

Kevin De Bruyne was also on the scoresheet as Clarke’s side were beaten 3-0 in Brussels.

Wales conceded late on to lose at Hungary while Northern Ireland benefited from a late goal to win in Belarus.

Steve Clarke’s side defended with a mixture of diligence and desperation in this 2020 European Championship qualifier only for all the good work to be undone just before half-time when a lapse of concentration ended with striker Romelu Lukaku heading in a cross from skipper Eden Hazard.

In truth, the goal had been coming and the Manchester United striker added a second in the 57th minute with a strike and Steve Clarke’s side had to work hard to prevent further damage before Kevin De Bruyne added a third in the final minute.

Roberto Martinez’s all-star team, ranked number one in the world, have won four out of four Group I fixtures while the Scots have six points from 12 and host Russia and Belgium in their next qualifying double-header in September, their task of qualifying for a major tournament for the first time since 1998 not becoming any easier.

James went on a superb 50-yard run down the left flank before feeding Tom Lawrence for a shot which was held by Hungary goalkeeper Peter Gulascsi.

Hungary carried a real threat from set-pieces and Dominik Szoboszlai headed wide before Holender was inches away from applying the final touch to Adam Szalai’s cross.

Hungary and Wales remained goalless at the break.

In what was proving a tight contest, Joe Allen volleyed wide from 25 yards and Hungary centre-back headed Balazs Dzsudzsak’s corner into side netting.

But chances were very much at a premium with defences on top.

Gareth Bale missed a glorious chance on the hour after Wales produced the best football of the match.

Brooks swerved away from his marker to free Lawrence and he squared the ball to leave Bale with only Gulacsi to beat.

But Bale scooped his shot weakly and Gulacsi collected easily. Wales had lost Ampadu to injury soon after the restart and he was replaced by Matthew Smith.

Hungary took an 80th-minute lead when Wales failed to clear the ball in their penalty area and Patkai fired home.

Allen had earlier preserved the 0-0 scoreline with an acrobatic goal-line clearance with the Hungarians convinced the ball had crossed the line.

Conor Washington, firmly in the shop window after being released by Sheffield United, wasted little time in showing an attacking threat, dragging a shot narrowly wide from the edge of the area in the fourth minute.

It signalled a strong start to the game from Northern Ireland, who were able to keep Belarus pegged back for large periods, applying pressure to the home defence with a string of corners and free-kicks.

Mistakes were creeping in at the other end though, with Belarus close to capitalising on a mix-up when Denis Polyakov sent in a dangerous cross which Corry Evans did well to head behind under pressure.

Craig Cathcart and Bailey Peacock-Farrell then had to scramble the ball away from two corners that followed before Polyakov tried a curling effort which was perhaps closer to the post than Peacock-Farrell realised.

But neither goalkeeper would be tested before the break as the sides went in goal-less.

Northern Ireland made a bright start to the second half. First a Jones cross from the left caused chaos as it span away from the goalkeeper. Magennis got a touch to play it back to McNair but his control let him down and Belarus scrambled it away.

But Northern Ireland kept the pressure on and Washington brought a decent save from Gutor with a driven effort.

Belarus responded as Lewis was booked for a foul on Igor Shitov in a dangerous position, but Stuart Dallas, just on for Magennis, cleared the free-kick with his first touch.

Just when it looked as though Northern Ireland would not find a breakthrough, Paddy McNair popped up with his first international goal.
The Middlesbrough man took the ball from Jones on the left, skipped over the challenge of Kisylak and drove the ball under Gutor.