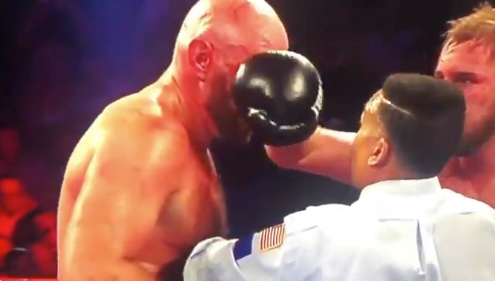 Tyson Fury may have come away with the victory on Saturday night in Las Vegas, but there is no question that Otto Wallin came out of that fight with a ton of credit.

The Swedish southpaw showed guts and determination throughout and thanks to a nasty cut above Fury’s right eye, he had a very good chance of winning the fight via TKO.

That wasn’t to be and although it was all respect at the end of the fight, many boxing fans didn’t appreciate his tactics at the end of round six.

As the bell rang to finish the round, Wallin rubbed his glove directly into Fury’s open gash and the Gypsy King was instantly furious.

On the one hand, it showed the Swede was not afraid to get dirty with Fury and he was prepared to do whatever it takes to win. On the other, many fans felt like it was poor sportsmanship and outright dirty.

Take a look for yourself:

Wallin ended up suffering the first defeat of his career and Fury just hung onto his unbeaten record, but his father John Fury was far from impressed with the performance.

It wasn’t the way Fury would have liked to warm-up for the rematch with Deontay Wilder on February 22, but he showed a different side to himself as a fighter.

And so did Wallin when he poked Fury’s nasty cut without a care in the world! All is fair in love and war, we guess.

Wallin stuck the thumb of his glove into Fury's cut at the end of Round 6. Dirty move but he's going for it here.

Otto Wallin is fighting rough and dirty. Fury seems rattled. I havent been scoring but rounds have been close.