Arsenal gift Aguero and Manchester City by not recruiting in January 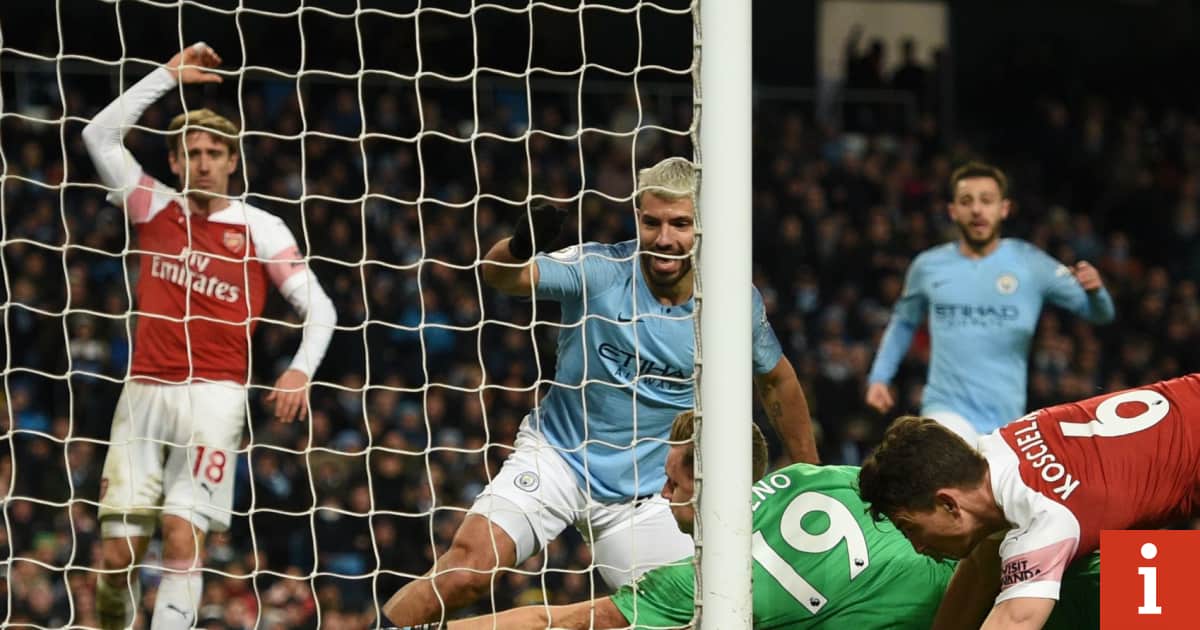 Header, right foot, left hand. That’s the perfect hat-trick, isn’t it? Something like that.

Whatever: Sergio Aguero’s three goals — his 14th treble for Manchester City — saw off an Arsenal side who can be erratically good or bad, thus potentially dangerous to anyone, to move within two points of Premier League leaders Liverpool.

Jurgen Klopp’s sider are like a pretty big fish being gently reeled in, hoping — praying — they will eventually be tossed back in, only to discover at the other end there is a great big shark holding the fishing rod.

Let’s not forget Liverpool were nine points clear at the top at one point at the end of last year, after thumping Arsenal 5-1. They were seven ahead two weeks ago, with the last-gasp winner in that 4-3 thriller against Crystal Palace. Now there are only two points between them, and – remarkably – by Wednesday evening City could potentially be top.

Liverpool face an awkward trip to West Ham on Monday and if they do not win and City beat Everton 48 hours later, Pep Guardiola’s side, the incumbent champions, will be top once again.

For Arsenal’s visit, Guardiola’s line-up looked as though he had made his selection decisions, walked into the prematch team meeting to tell the players and instead pointed to the chalkboard, saying merely, “Lads, it’s Arsenal,” before walking out again. Kevin De Bruyne, David and Bernardo Silva, Sergio Aguero, Raheem Sterling.

And there was the start to this match that approach warranted: 46 seconds in and Aguero’s diving header put City in front. Having scored 24 seconds into their midweek game against Newcastle United, the Argentinian scored the second fastest Premier League goal of the season. There aren’t many things that can be done twice in 70 seconds, and it’s rare that scoring two goals is one of them.

Arsenal had only themselves to blame: Alex Iwobi was caught with the ball inside his own penalty area by Aymeric Laporte, when they had had plenty of chances to clear, and the defender bent in the ball left-footed for Aguero to convert. It was Arsenal at their shambolic worst.

Looking at that Arsenal line-up, with on-loan Barcelona midfielder Denis Suarez on the bench, you couldn’t help but wonder why manager Unai Emery desperately tried to recruit attacking midfield options and not a decent defender or two in the January window. Arsenal’s current defence feels like a sieve with holes in it.

But Arsenal under Emery can also be an impressive shambles sometimes and they drew level with their first attack, 11 minutes in. An odd one to concede: Lucas Torreira swung in a corner, Nacho Monreal flicked on and Sterling, one of the smallest players on the pitch, was supposed to be marking one of Arsenal’s most dangerous set piece men Laurent Koscielny, but the Arsenal defender was completely free to head in from close.

For the rest of the half — and most of the match — City kept the ball with that wonderful attacking five, although it took until a minute before the break for their second. It was as though City’s players were competing against each other for who could pull off the best pass in the build-up. As they poured forward once again in one more of those waves of attrition, Fernandinho sent the ball some 30 yards out to Sterling on the left — not bad. Sterling drove toward’s Arsenal’s area then cut the ball back to Ilkay Gundogan, continuing his run as Gundogan lofted the ball high over two Arsenal players into his team-mate’s path — not bad. Then Sterling sent the ball first-time at such a clever angle between Arsenal’s backtracking defenders and goalkeeper Bernd Leno that it found Aguero at the back post for a tap in — not bad at all.

The controversial third arrived just after the hour. Sterling was involved again, dribbling inside Arsenal’s penalty area and sending in a low ball. Leno managed to half-block it, but as the ball travelled away from his goal it struck Aguero suspiciously near to — if not almost certainly on — his left hand, down at grass level as he slid in, and bobbled over the line.

Arsenal’s players complained but referee Martin Atkinson saw nothing wrong and awarded the hat-trick, moving Aguero on to 14 league goals for the season, level with Harry Kane, one behind Pierre-Emerick Aubameyang and two behind top scorer Mohamed Salah, having scored eight goals now in his last eight games.

The 30-year-old was supposed to be already on his way out at City, to make way for the younger Gabriel Jesus. Like City, he refuses to give in. And now it’s down to two.