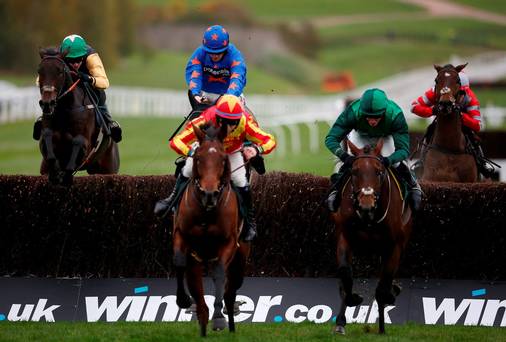 The jumps season in theory should be something we dread, but It truly is the most wonderful time of the year.

The season corresponds with cold weather, rainy days and going/coming from work in the gloomy darkness.

Nothing about these seasonal conditions can temper the racing fans enthusiasm though. I would consider myself a flat and jumps racing fan, but for pure emotional attachment, enthusiasm and excitement few sports in the world even come close to National Hunt racing.

On paper at least, it looks like we are in for another stellar season ahead.

Female Jockeys were a buzz word throughout the 2017/18 campaign with Rachael Blackmore, Bryony Frost and Lizzie Kelly continuing to shine in the saddle.

This season has only begun in earnest, but I’m delighted with the lack of delirium around how strong a start Rachael Blackmore has enjoyed thus far.

She truly is a trail blazing jockey who is currently second in the Irish jockeys table with 44 winners – only 2 behind Paul Townend. Rachael was the first female jockey to go professional in Ireland and to be this close currently is some feat. She has simply been superb for a long time now.

Racing, like any aspect of sport and life, can’t escape the fact that sexism has been prevalent in the past. Last season, I found myself very uncomfortable with the hysteria around the emergence of Bryony Frost.

The “good girl Bryony” rhetoric seemed to continue for the whole season, even though she had proven herself time and time again as a jockey to note.

Bryony is a not a “very good female jockey”, she is a very promising jockey whose demeanor and openness is great for the game. She should be asked the same questions about her victory as any male jockey would be.

Racing has to be proud that we are one of very few sports where females compete with males off a level playing field. In the very near future we will only continue to see more female jockeys making their way towards the pinnacle of this sport, purely based on merit.

A female jockey winning a race should now be treated as a common occurrence, as it’s beginning to become exactly that.

I’m not suggesting the likes of Rachael Blackmore & Bryony Frost should not be used as an inspiration to any young girl dreaming of being a jockey, but surely racing could only benefit from the reality of a sport where your gender doesn’t matter – If you’re good enough, you will make it.

Rachael Blackmore has enjoyed such a strong start this year, but the racing media in Ireland have not been rushing with the same rhetoric aimed at Bryony Frost last season and I’m really enjoying this.

Rachael Blackmore is a former champion conditional, riding for the biggest yards in the country and she should only be lauded as the brilliant jockey she is – not as a marketing ploy to try to show the world of how inclusive racing is.

Only when “the Sport of Kings” stops discussing the sex of a jockey, and judges everyone equally on their ability in the saddle, will racing be able to truly say that sexism isn’t a prevalent force in our sport.

I truly believe we are well on our way there…

The 2018 Cheltenham Gold Cup was a race that definitely didn’t disappoint.

The all the way battle between Might Bite and Native River is a race that will live long in the memory. Both look like they might compete for the million-pound bonus awarded for winning the the big one in Haydock in November, the King George and the aforementioned Cheltenham Gold Cup. This should tee us up for one hell of a season.

When you throw in the likes of Waiting Patiently, Sizing John, Footpad & Thistlecrack it’s a division to savour once again, on paper at least.

The world of two miles hurdling has been disappointing for the last two years, and whilst I love Buveur D’Air, it is fair to suggest he has been dominating a waning division over the last while.

This could all change however with Samcro, Laurina and Summerville Boy all entering the division, to beef up the challenge of Melon who came oh so close last season. I think Saldier could play a big hand throughout the year also.

A lot of water must pass under the bridge between now and the big 2 miles races, but it’s a division to look ahead to with excitement.

Altior should be hard to stop again if continuing in the 2 miles chasing division, but I’d love to see the aforementioned Footpad run here and take him on.

If you add Footpad to a potentially rejuvenated Douvan, the challenge to Altior would be very strong. I personally think Altior would see it out regardless, but we want the best horses taking each other on over their optimum trips, and it’d be one hell of a race were they all to meet.

The stayer’s division is not something I ever get too fretted about early in the season, but the potential rematch of Faugheen and Penhill would be another cracker to look forward to.

Basically, we have plenty of top quality clashes in every division potentially on the horizon, something the jumps season has been lacking over previous years.

It’s around this time of the year where knowing what young jump jockeys to follow is always an advantage. Those extra few pounds in big handicaps can be a major advantage and there’s two young conditionals I’m particularly excited about in Kevin Brouder and Daniel Samsom.

In Ireland, Kevin Brouder has been nothing short of excellent in his short career so far. He really earmarked himself as a conditional to follow when his supremely cool ride aboard Black Scorpion in a valuable handicap chase at his hometown Listowel Festival. He’s cool in the saddle, tactically very aware and his claim of 7 pounds is tremendous value.

The likes of Donie McInerny, Dylan Robinson, Barry Browne and Katie O’Farrell are others to note in Irish handicaps and beyond.

Naturally in the UK James Bowen should be hard to stop in claiming the conditional jockey’s championship, with Bryony Frost expected to enjoy another strong year.

One young jockey I’m keen to keep onside is Daniel Samsom, who has really impressed me over the last 2 seasons with Seamus Mullins. Criminally underused, he’s averaging a win for every 5 rides with 10 winners this season so far from 49 rides.

He has shown his composure in the saddle with his very successful partnership with Chesterfield – with the pair winning at the Aintree festival and following that up with a Scottish Champion Hurdle win.

He should hopefully start getting a few more outside rides, and his claim of 5 pounds is fantastic value.

I love this time of the year when thinking about the season ahead. None of your fancies have been beaten yet, hope is very much alive!

I think that whilst he won’t be the first 5-year-old to flop, there is plenty of raw potential in Saldier as he was so impressive at Punchestown last year and Great Field is overpriced in what is not a deep division.

Waiting Patiently is very speculative, but he is a horse I love, and I really believe he is something very special.

I’m aware he’s much shorter for the Ryanair as that would be his current optimum trip, but we haven’t got anywhere close to unlocking his true potential.

After he wins the King George in impressive fashion at Christmas, I’m hoping connections change on their previous thoughts about the “Festival” and roll the dice for Cheltenham Gold Cup glory.

My main horse to follow this season is Santini, who I absolutely adore. He proved himself a very smart horse last season and should only improve over fences. I think he’ll dominate whatever division he goes down this year.

You can only be excited about what’s to come in the 2018/19 Jumps campaign.

There is the potential for a season full of top clashes and I simply cannot wait for it all to begin in earnest.

May the odds be ever in your favour this coming season…