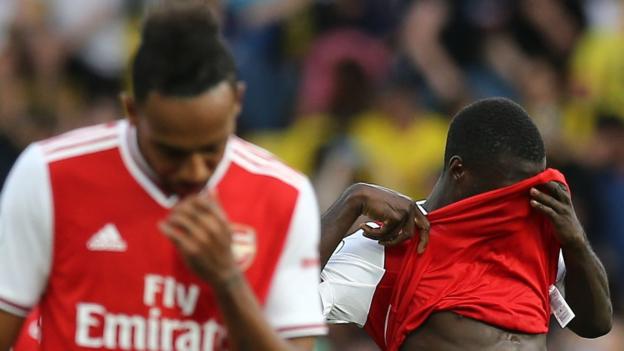 Arsenal crash out of Europa League after Aubameyang's late miss

Olympiakos win on away goals

Arsenal captain Pierre-Emerick Aubameyang missed a sitter with the last kick of the match as his club crashed to a shocking Europa League defeat at the hands of Greek club Olympiakos.

Aubameyang, normally the Gunners talisman, brought parity to the proceedings with a spectacular scissors-kick in the 113th minute after the visitors from Greece had gone up by a goal from centre-back Pape Abou Cisse in the 53rd minute. But thanks to some awful set-piece defending on the part of the hosts, Olympiakos were back in the lead only six minutes later when Youssef El Arabia prodded home a clever ball from Giorgos Masouras much to the delight of raucous travelling fans.

There still seemed to be time left for Aubameyang to conjure up something out of the blue, but that was not to happen as the 30-year old Gabonese international missed a golden chance to seal the tie when he couldn't score from a mere five yards and oust Mikel Arteta's side from the 2019-20 UEFA Europa League.

Aubameyang was left devastated after the match as he was seeing lying on the field with his head buried in his hands in anguish. It took team-mates Hector Bellerin and Gabriel Martinelli to console him and bring him temporarily out of his misery.

“I feel very bad” was what Aubameyang was heard saying after the game with the forward stating he was unsure as to how he missed the late chance.

As for the game, for large periods of the match at the Emirates a full-strength Arsenal XI were frustrated as unconventional defensive tactics from the visitors gave an attack-minded Gunners side little leeway, so much so that their first shot on target came in as late as the 77th minute of play. The Arsenal forward line of Aubameyang, Alexandre Lacazette, Mesut Ozil and Nicolas Pepe costing £215m to the club hardly made any impact. The four managed just one shot on target between them before Aubameyang's brilliant late goal aroused hopes of Arsenal progressing.

Arteta could point to decisions that did not go his team's way – a yellow card shown to Olympiacos centre-back Ousseynou Ba for a foul on the edge of the area that could well have been red and an offside flag that could have been raised in the build-up to Olympiakos' 119th minute winner. But the fact remains that the London club did not create enough to win.

Olympiakos were far from enterprising in their approach considering they had lost the first leg in Athens but carried out their game plan to perfection to steal a famous win and progress to the Round of 16.

With the ouster, Arsenal’s hopes of qualifying for the Champions League by winning the Europa League were dashed. The Gunners now must hope Manchester City’s UCL ban is upheld while simultaneously surging up the English Premier League table from the 9th place on which they are currently to at least the 5th.