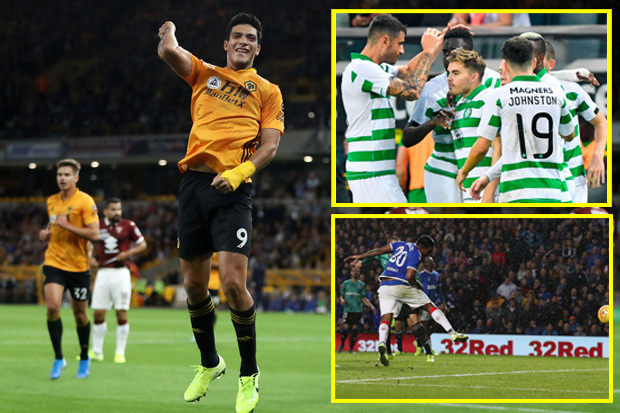 There will be five British teams playing in this season’s Europa League after Wolves, Celtic and Rangers all got through their respective qualifying matches.

Steven Gerrard’s Rangers made it through in dramatic circumstances with a last-gasp goal enough to make them progress at Legia Warsaw’s expense.

Celtic’s path to the groups was far more straightforward as they thrashed AIK in Sweden.

There was no such luck for Northern Irish side Linfield, who were suffered an agonising defeat on away goals to Azerbaijani side Qarabag.

Below you can see the match reports for Wolves, Rangers and Celtic on a night of British success in the Europa League.


England Women throw away two-goal lead in draw against Belgium


Wanyama completes transfer to Belgian side from Spurs, talkSPORT understands


Who will qualify from every Champions League group – predicted

Raul Jimenez and Leander Dendoncker fired Wolves into the Europa League group stage after a 2-1 win over Torino.

Striker Jimenez struck his sixth goal in six European games to help send the hosts through 5-3 on aggregate in their play-off.

Andrea Belotti briefly levelled in the second half before Dendoncker struck to cap victory at Molineux, extending Wolves’ first European campaign since 1980.

A dramatic stoppage-time goal from Alfredo Morelos goal saw Rangers advance to the Europa League group stages with a 1-0 win over Legia Warsaw at Ibrox.

It was a frustrating night for Steven Gerrard’s men against their obdurate Polish visitors, having drawn the first leg 0-0 in Warsaw last week.

However, in a game of few chances, Morelos nodded in Jordan Jones’ cross to seal Rangers’ place.

Christopher Jullien and Lewis Morgan scored their first Celtic goals in Stockholm as Neil Lennon’s side cruised into the Europa League group stage.

But the 4-1 win over AIK came at a cost, as a groin injury for Kristoffer Ajer made him a major doubt for Sunday’s trip to Ibrox.

Jullien and Morgan netted from close range in the opening stages, but wingers James Forrest and Michael Johnston had done the damage in the first half as Celtic went into Friday’s draw with a 6-1 aggregate victory over the Swedish champions.

Forrest netted with a brilliant counter-attacking goal in the 17th minute, but Sebastian Larsson had levelled from the spot in the 33rd minute.

Neil Lennon’s men responded immediately and retook the lead when Oscar Linner turned the ball into his own net.

They added to their lead after the break when Jullien slid in front of Scott Brown to force Christie’s low cross over the line following a short corner four minutes from time and substitute Morgan headed Forrest’s cross home in stoppage time.

United, Arsenal, Wolves, Celtic and Rangers will learn who they’ll face in the group stage draw on Friday.