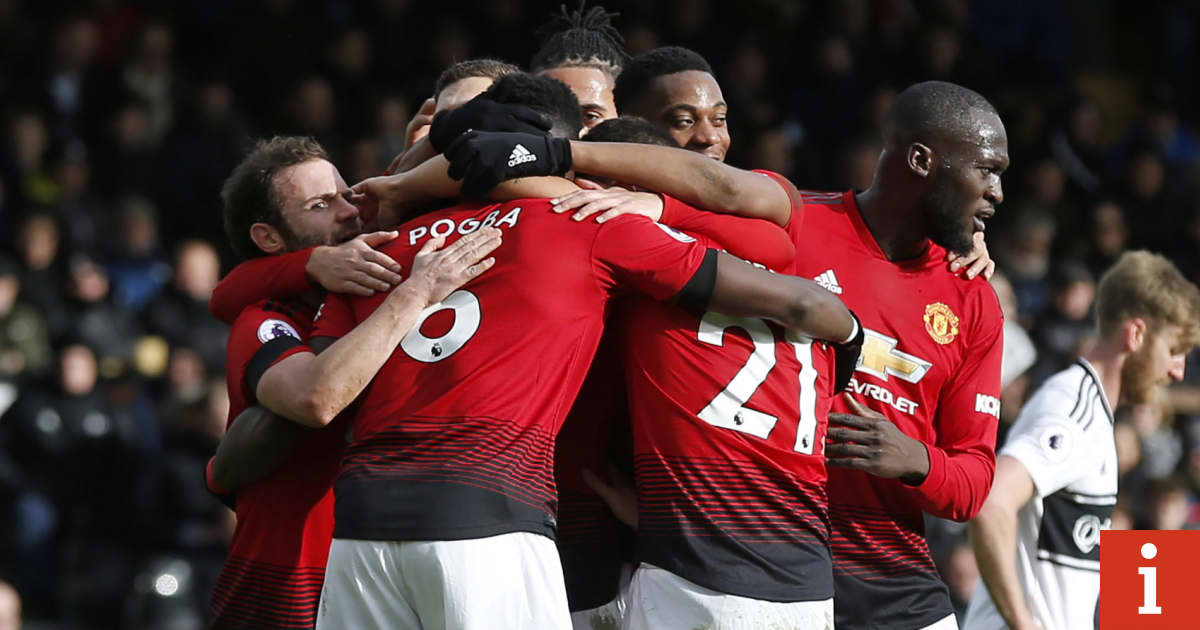 It was always one for the optimists, this. Those billing Manchester United’s visit to Craven Cottage as the upset to kick off Fulham’s survival miracle were steadfastly ignoring the form table, which United topped come kick off with their opponents third bottom, above only Brighton and Huddersfield. Fulham had lost all eight of their games against top-six opposition before this, including a 4-1 thumping at Old Trafford towards the end of Jose Mourinho’s United tenure, by an aggregate score of 25-5. Claudio Ranieri tried to manage any expectation of a shock result before the match, saying: “We don’t need one match to change the mood. We need more matches to change the mood.”

It might have been different had Luciano Vietto scored with barely a minute on the clock, this after the lively Andre Schurrle had got in behind the United defence and sent a pinpoint cross to him at the back post. Instead, Vietto steered the ball wide and United continue to benefit from the good luck they have experienced under Ole Gunnar Solskjaer’s pixie-like management. Solskjaer was forced to leave out Victor Lindelof as a precaution even though he admitted he was “not really a concern” for next week, leaving a sense that he was looking for an excuse for some rest and rotation ahead of the visit of Paris Saint-Germain to Old Trafford next Tuesday. His second-choice centre-back pairing of Phil Jones and Chris Smalling looked uncertain of themselves early on, with Vietto, Schurrle and Ryan Babel all looking sharp.

Fulham had already shown a few signs of being ready to commit the defensive hara-kiri which has sabotaged their season so far. Maxime Le Marchand, playing at centre half, had the first moment of idiocy at the back, attempting to dribble out from a risky position only to be dispossessed in front of the box, almost allowing Paul Pogba to score. As it turned out, Pogba would not have to wait too much longer to add to his goal haul. Anthony Martial set him away to the left of the goal and, from a tight angle, he guided his finish past the flapping right arm of Fulham keeper Sergio Rico. Replays showed that left-back Joe Bryan had been playing Pogba onside, with Fulham’s defence impossibly soft.

Ten minutes later, it was Martial’s turn to horribly expose the Fulham back four. With Denis Odoi playing a ludicrously high position at right-back, a simple pass from Phil Jones allowed Martial to tear away down his flank. Killing Le Marchand with a clever jink, Martial was never going to be caught. He proceeded to fire a beautiful curled shot past Rico, the ball swerving on the icy wind blowing off the Thames and slamming into the top right corner.

If Solskjaer saw this game as little more than a preface to the clash with PSG, it will at least have allowed United to sharpen up their attacking instincts. Though Marcus Rashford and Jesse Lingard – both on the bench against Fulham – are expected to start in place of Romelu Lukaku and Juan Mata on Tuesday, Martial had an excellent game and Pogba, United’s attacking fulcrum in the midfield under Solskjaer, was at his all-action best. United’s performance was far from perfect, especially during a somewhat disjointed second half, but Pogba still added another goal after a soft penalty for Juan Mata and United could have scored more.

‘You don’t know what you’re doing’

For Ranieri, meanwhile, the honeymoon period seems to be over after barely three months in charge. His decision to substitute Schurrle for Cyrus Christie early in the second half was met with boos, followed by chants of “You don’t know what you’re doing” and “Ryan Sessegnon, he’s one of our own”. Much has been made of Sessegnon’s lack of game time under Ranieri, though he has been far less effective this season than he was in the Championship. Still, his omission is unpopular among Fulham fans and Ranieri may want to consider reintegrating him into the starting line-up, though in fairness the ‘Tinkerman’ was seeking a change of team shape more than a straight swap when he brought Schurrle off.

Fulham have found their fortunes marginally improved under Ranieri, in contrast to the dark days at the end of Slavisa Jokanovic’s reign when they lost six games in a row in the Premier League. He now has 12 points from his first 14 league games in charge, compared to five from their first 12 under Jokanovic. That is not the sort of points-to-game ratio which saves a team from relegation, however, and Ranieri must know that time is running out for his side. It may have been optimistic to expect them to upset United, but there are games coming up against West Ham and Southampton which they absolutely must win lest they prove the worst pessimists justified.