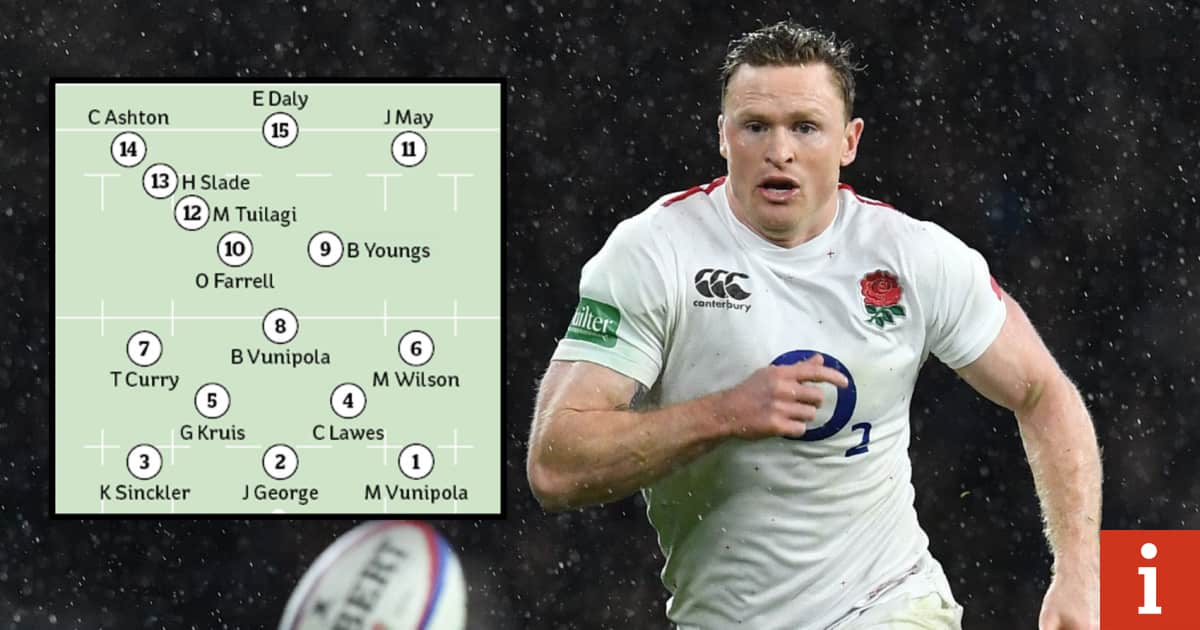 Eddie Jones has made two changes to the England team to face France at Twickenham on Sunday. Courtney Lawes comes into the second row to replace the injured Maro Itoje while Chris Ashton will start on the wing in place of Jack Nowell.

England have been installed as favourites to win the Six Nations title following their 32-20 win over reigning champions Ireland on the opening weekend.

The injury to Itoje will be cause for concern for Jones ahead of the French visit. The 24-year-old was an imposing figure in Dublin and is not expected to figure again for England until towards the end of this year’s championship but Lawes will add extra mobility and considerable experience to the England pack.

While the starting front row remains the same, props Dan Cole and Ben Moon have replaced Harry Williams and Ellis Genge on the bench to add some extra heft up front. Joe Launchbury also returns as a replacement second-row following his recovery from injury.

Lawes for the injured Itoje is a change for England that maintains pace and oomph in the broken field. France have a shocking away record in the Six Nations, beating only Italy on the road since a win in Scotland in 2014.

The half-back hinge of Morgan Parra and Camille Lopez has quality but they alone cannot stitch together the now customary mix-and-match pack.

While Jones may or may not be right in insisting this match has no significance for the World Cup pool meeting to come in Japan in October, he surely expects it to bring win number two for the red rose in this Six Nations.

View from the coaching staff

“The French are always an interesting side to play against,” said Jones when announcing his team. “They are full of talent, they have a lot of unpredictability so it’s hard to prepare tactically against them so we have had a real focus on ourselves.

“It is unfortunate Maro is injured but he has been rehabbing well so we are hopeful he will be back earlier than maybe first predicted. We have got great depth in the squad so Joe Launchbury and Courtney Lawes will fill his shoes very well.

“We have gone for Chris Ashton on the wing; we think he might sneak us a try early in the game. Jack Nowell was brilliant against Ireland and he’ll play a significant role for us off the bench.

“We can’t wait to play in front of our supporters, I’m sure they will be buoyant by the first round results and we promise we will play a better game on Sunday.”

Match preview: ‘England ready for anything’

Watching England is becoming a seat-of-the-pants exercise. Take your seat just a little late at Twickenham or in front of the TV on Sunday, and you risk missing a try. Never mind the scrum’s dark arts, Owen Farrell’s team are currently the masters of the fast start, as they get set for round two of the Six Nations, at home to France.

In each of their last four Tests, England have bagged a try inside the first three minutes. They did it in a mere 92 seconds in Ireland a week ago, with a gutsy line-out thrown to Manu Tuilagi in the midfield, a few super-sharp recycles at the ruck and a finish by the predatory Jonny May. It set the tone and the pace for a dominant 80 minutes, and a superb 32-20 win. In the autumn, New Zealand, Japan and Australia were similarly hit hard and early on successive Saturdays at Twickenham. Top-class opposition are finding Farrell’s men have no interest in playing themselves gently into a game.

“Everybody wants to start the game well and we’re no different,” Farrell said on Friday, naturally enough. But with his pre-match toss of the coin for kick-off now assuming greater significance given England’s success at making an initial position in opposition territory count heavily, the captain expanded on the theme.

“There were a lot of times last year when we started really well and were unable to keep it up or not able to withstand the pressure that got put back on us,” said Farrell, thinking no doubt of the loss to New Zealand after Chris Ashton’s quickfire try, as well as, in a looser sense, a win over Wales and losses on tour in South Africa when England posted points in the first quarter but tailed off later. “The most pleasing thing from the last however-many games is that we’ve kept engaged, we’ve kept ready for anything and stayed in the fight throughout the game.”