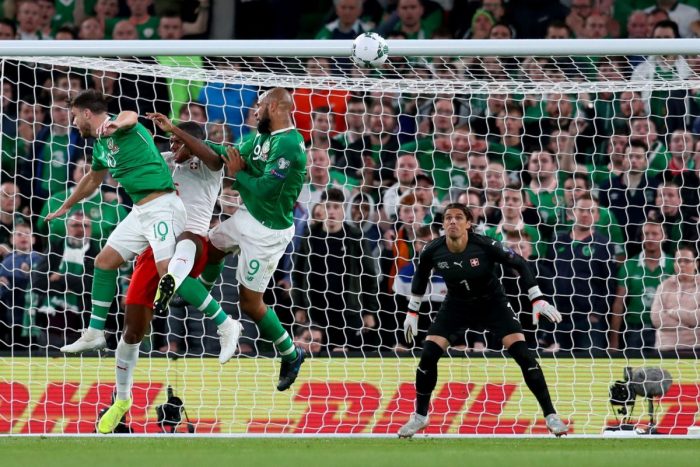 David McGoldrick scored a late equaliser for Ireland against Switzerland to preserve their unbeaten record in the Euro 2020 qualifiers.

Mick McCarthy’s side were fearing the worst when the visitors scored a second half goal in Dublin before the Sheffield United striker netted late on to make it 1-1.

The visitors got their noses in front, after squandering several chances, with 16 minutes remaining when Fabian Schar advanced once again and played a fine one-two with Embolo before sliding a shot past Randolph and into the bottom corner.

However, the game was far from over and after Whelan had rattled the crossbar with a long-range piledriver, McGoldrick rose to meet McClean’s deflected 85th-minute cross to head home his first senior international goal to make it 1-1.

Ireland remain top of Group D on 11 points ahead of Denmark (on eight) and Switzerland (on five) but have played more games.

Christian Eriksen scored two penalties for Denmark as they thrashed Gibraltar 6-0 at the Victoria Stadium.

Robert Skov gave Denmark a sixth minute lead before the Tottenham start netted the first of his two penalties in the 34th minute.

The second came after 50 minutes before a further three goals in nine minutes, with one for Thomas Delaney and two for Christian Gytkjr, completed the rout.

Sergio Ramos and Paco Alcacer were on target for Spain at they won 2-1 in Romania as they maintained their perfect record in Group F.

Andrea Berlotti scored twice for Italy in their 3-1 win against Armenia while Norwich’s Teemu Pukki scored from the penalty spot to give Finland a 1-0 victory against Greece.

Here is how all of Thursday’s qualifiers finished.