Horse Racing Terms you need to Know for the Belmont Stakes 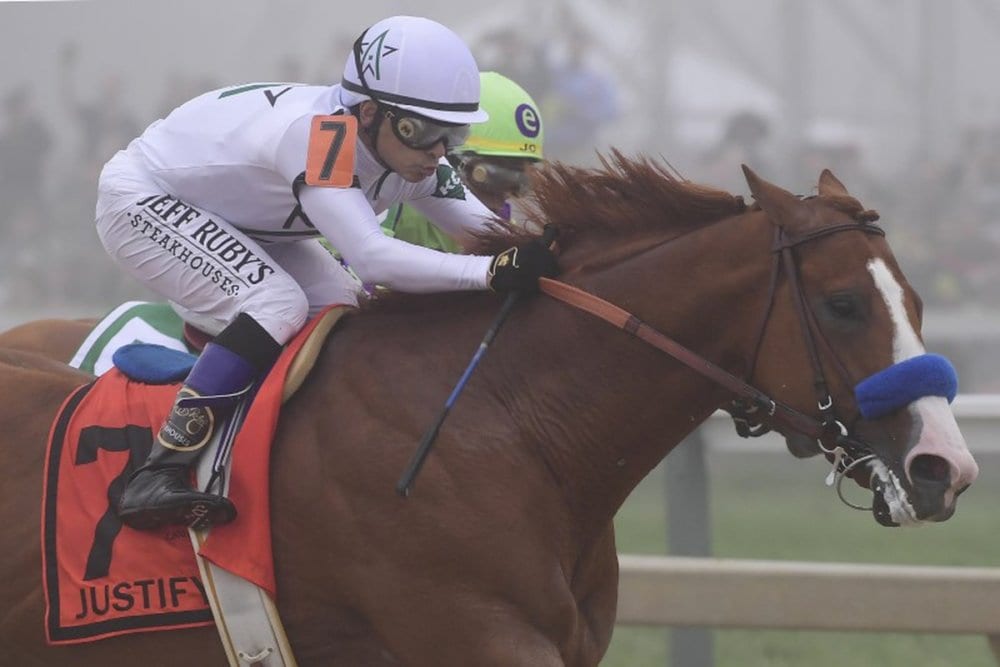 Should Justify win the Belmont Stakes, he would become just the 13 th horse in US hose racing history to capture the Triple Crown, which refers to the Kentucky Derby, Preakness Stakes, and Belmont .

Watch Justify win the 2018 Kentucky Derby – Can he do the Triple?

Justify will be the “chalk” in the 150 th running of the Belmont Stakes, that is to say that he will be the heavy favorite in the race. Calling a favorite the chalk dates back to when bookies use chalkboards to update odds and the odds of the favorite had to be continually updated as money came in on that horse .

A generic term describing a large, white vertical differentiate on a horse's face. Justify has a striking blaze .

Graded stakes: These are the highest-level races in horse racing. On a good day at the track, you may witness one or two graded stakes but on Belmont Stakes day there are nine graded stakes scheduled. In addition to the Belmont Stakes, other graded stakes on the card include: the Acorn Stakes, Brooklyn Invitational Stakes, Jaipur Invitational Stakes, Longines Just a Game Stakes, Ogden Phipps Stakes, Runhappy Metropolitan Handicap, Woodford Reserve Manhattan Stakes, and the Woody Stephens Stakes Presented by Mohegan Sun .

The nickname of Belmont Park, referring to the massive size of the track that has traditionally been known for its tiring, sandy surface .

Three-year-old horses. Called sophomores because age three is the second year of racing eligibility. All of the horses competing in the Belmont Stakes will be “sophomores.”

This refers to when a horse wins a race by being on the lead from start to finish, much like American Pharoah did when winning the Belmont Stakes to capture the Triple Crown in 2015. Since Justify is generally on or near the leading, there's a chance he could win in wire-to-wire way .

This is the official beverage of the Belmont Stakes. It consists of whiskey, lemonade, and pomegranate juice and can be topped off with orange zest .

This is the area where the horses get saddled before the race and where the jockeys climb aboard before walking through the “tunnel”( in the case of Belmont) to get to the track .

The Long Island Rail Road( LIRR) is the most commonly used means of transportation to get at Belmont Park in Elmont, NY .

This is a bet type that is unique to New York tracks. The Grand Slam requires the person making the wager to pick a horse who finishes in the first three positions in three consecutive races, and then select the winner of the fourth race in the sequence .

Test of the Champion:

The Belmont Stakes is often referred to as the” Test of the Champion” because it demands runners pass the grueling test of a mile-and-a-half distance on “Big Sandy.” Not only can the surface be tiring, the distance of the race is a one-quarter of a mile longer than the Kentucky Derby and will, for most runners in the race, represent the longest race they'll ever run .

A measurement approximating the length of a horse, used to denote distance between horses in a race. For example,” Secretariat won the Belmont Stakes by 31 durations .”

This is the study of factors in the past performances of racehorses used to determine the relative qualities and abilities of horses in a race .

There's a way competition on Belmont Stakes day presented by Longines. The” Prize of Elegance” is awarded to the best garmented, who also wins a Longines watch .