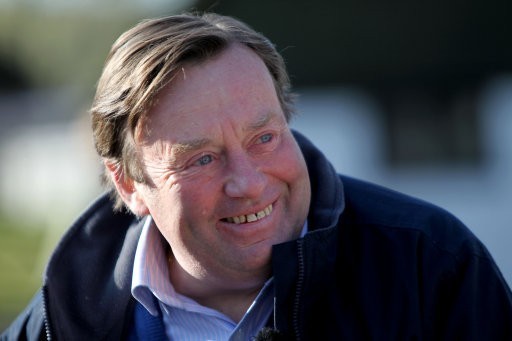 By his own admission Nicky Henderson “doesn’t win Grand Nationals”, but the Seven Barrows supremo hopes Vyta Du Roc might defy that statement in today’s Welsh National at Chepstow (14:50).

Champion trainer Henderson has won most of jumps racing’s biggest prizes although the four major Grand Nationals in Britain and Ireland have so far eluded him during his illustrious career.

He sends just a single runner to Chepstow for the 3m5½f feature contest, with 18/1 chance Vyta Du Roc set to carry the famous two-tone green silks of owners Simon Munir and Isaac Suede.

It won’t be easy although Henderson appears to be quietly confident the nine-year-old will go well in the hands of Daryl Jacob.

“I don’t win Grand Nationals, but we’re rather happy with him and on his best form he’d have a chance. He’s run some good races and seems in very good form,” said Henderson.

He wore first-time cheekpieces that day but, after a bout of colic, missed the rest of last season. The headgear was left off last month at Bangor on his reappearance and Vyta Du Roc was pulled up. The aid returns now.

Last year’s winner Raz De Maree runs once more for Gavin Cromwell on the eve of his 14th birthday, while trainer Colin Tizzard will seek his latest Welsh National win with Elegant Escape, second in last month’s Ladbrokes Trophy at Newbury and the 4/1 favourite with Betfred going to Chepstow.

Also of interest could be David Pipe’s Becher Chase second Vieux Lion Rouge at 10/1 and Folsom Blue, 15/2 here for Gordon Elliott, having finished a close-up fourth in last season’s Irish Grand National after a luckless run from the final fence.