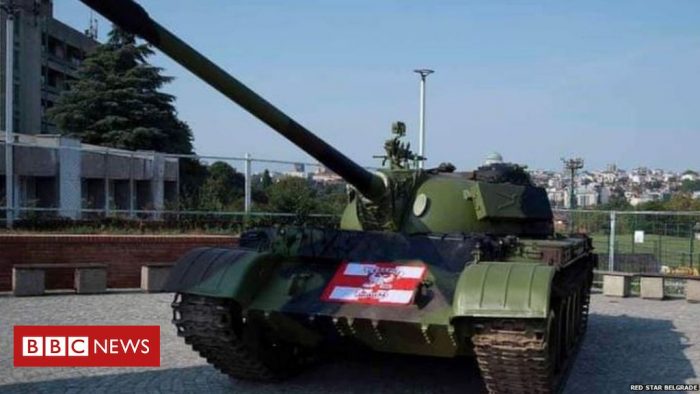 Serbian football club Red Star Belgrade has placed a tank outside its stadium as an “attraction”, sparking heated debate on social media across the region.

The club unveiled the tank on the eve of its decisive game in the Champions League playoffs against Swiss side Young Boys with this upbeat message:

“The famous slogan of the fans was that the Star Machine worked, and now the tank in front of the north stand will symbolise the call. The Northern Army is stronger with a combat vehicle.”

Star fans refer to themselves as the Northern Army and have often used a tank symbol to show their support for their club during games.

But while the club saw the “monument” as the befitting highlight of the euphoria ahead of the clash, for others, it evoked memories of a painful episode from the Balkans' recent past.

The move received negative coverage in neighbouring Croatia and Bosnia with some headlines suggesting the tank was used in Vukovar during the war in the 1990s.

Croatian daily Jutarnji List described the move as a “morbid provocation” and recalled that two years ago Red Star basketball club fans used a tank motif above a banner that read “Vukovar” in Cyrillic.

“At the time, Zvezda [Red Star Belgrade] issued a statement saying a tank was part of cultural heritage (?!) and not an allusion to Vukovar,” the paper said.

The move was met with nationalist pride by some in Serbia. “There is great symbolism behind this act”, observed Serbian Pravda. “Namely, today, in 1991, fighting began between the Yugoslav People's Army and the Croatian military forces for the town of Vukovar!”

The club responded with indignation, calling references to the 1990s wars “nonsense”.

The truth is, it said, the tank was purchased from a military waste site in Leskovac, where it was painted and decorated for its reincarnation as the Star Machine. It also hinted that the “damage” from the “stupid discussions” could lead to punishment for the club.

European football governing body Uefa did not answer a question by the BBC's Serbian service whether the tank in front of the stadium violated their rules and whether the Stars could face a penalty.

The club's announcement on Facebook provoked a mixed reaction. While some justified the display as a memorial to Star's loyal fans “fallen in homeland wars”, most commentators are distinctly unimpressed. The most popular comment says: “It is certainly attractive, but I am not sure how smart this is.”

A poll on the sports pages of Serbian daily Blic noted that “Red Star's tank divided Serbia” and asked if it was an “excellent or foolish act” to place it outside the stadium. Out of 320 respondents, 30% were happy about it, 23% were angry and 32% were sad.

Elsewhere in the region, the news was widely shared and criticised. The most popular comment on Bosnian news portal Klix said: “A tractor would be more appropriate,” possibly alluding to the manner of Serbs' retreat from the self-styled Serb Republic of Krajina, which was overrun by Croatian forces in 1995.

Next story: Belgian city to fine residents over weeding

Use #NewsfromElsewhere to stay up-to-date with our reports via Twitter.