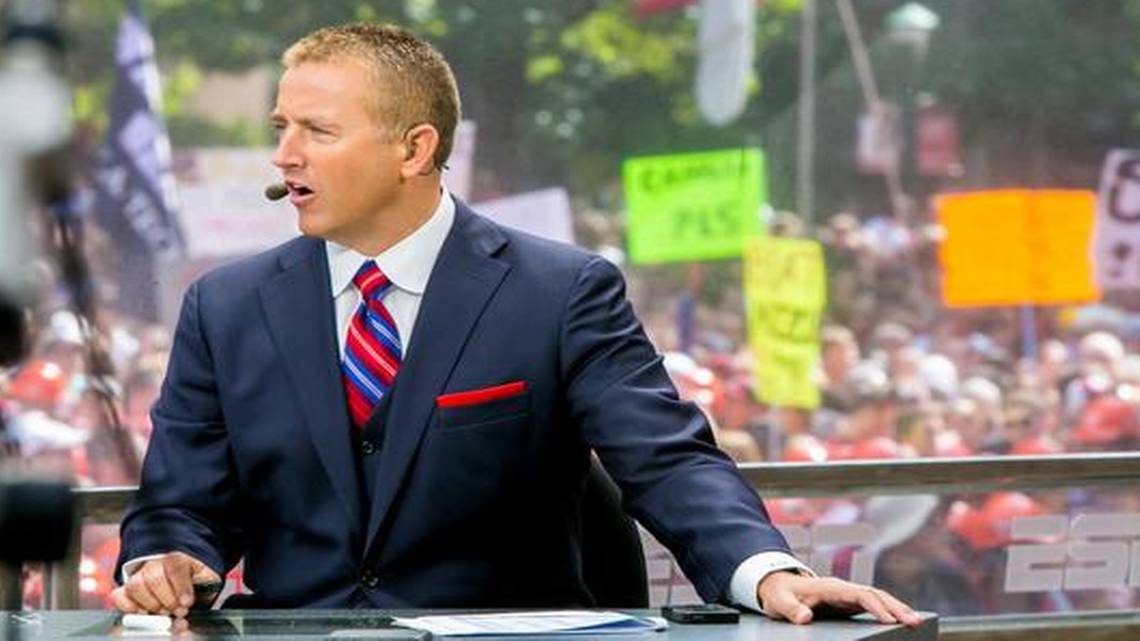 ESPN analyst Kirk Herbstreit didn’t even need to pause when asked whether Penn State’s annual White Out is the best environment in college football.

The former Ohio State quarterback said on ESPN’s “Behind the Bets” podcast that it’s “the best atmosphere year in and year out.”

“Everything I say I try to be as fair as I can be and there are some great atmospheres out there,” he said Wednesday. “It’s the best atmosphere year in and year out. … And when they’re ranked in the top 10 and they bring in an opponent in the top 10, you’re not going to find a better, more intimidating, more involved fan base for 60 minutes than the White Out at State College.”

Herbstreit discussed Penn State and Saturday night’s game against Ohio State at length on the podcast, hosted by Bear and Stanford Steve — including, naturally, a little betting advice on the Nittany Lions. Here’ a transcript of what he said below:

Herbstreit: I’m not saying this, whether it’s Big Ten, Pac-12, SEC. Everything I say I try to be as fair as I can be and there are some great atmospheres out there. It’s the best atmosphere year in and year out.

This thing started back in ‘05, and it’s just kind of become an annual thing where they’ve picked the one home game. Last year it was Michigan, two years ago Ohio State, this year Ohio State. And until you’ve gone there and seen it, you just can’t really quite understand it.

Now it helps that Penn State is back to being Penn State and obviously they went away there for a while. But that ‘16 game to me up against Ohio State got them back to kind of being the program that we’re now accustomed to seeing. And when they’re ranked in the top 10 and they bring in an opponent in the top 10, you’re not going to find a better, more intimidating, more involved fan base for 60 minutes than the White Out at State College.

Herbstreit: Well, I think Penn State’s offense … it’s incredibly complicated when you throw in Trace McSorley, who’s like a point guard. He’s making a lot of split-second decisions, whether it’s run or run to pass or pass to run. A lot of different things can happen based on what the defense is doing to him, and the guy’s been around now for three years. He’s been there and done that. He’s very similar to Baker Mayfield last year — I’m not comparing him physically to him — but I’m just saying that, kind of the straw that mixes the drink. The intangibles, having the answer, an extension from the offensive staff out on the field. He’s basically a coordinator out there.

So when you throw that in and you throw in Miles Sanders, who we knew about last year — he just didn’t get an opportunity because of Saquon (Barkley) — and the young receivers are starting to emerge, I’ll tell ya: If you’re a Penn State fan, there’s a lot to be excited about.

And while Ohio State is still somewhat — you said young — in the secondary, I think their front, even without Nick Bosa, is going to be a big factor in this game. Dre’mont Jones and Chase Young and Robert Landers, those guys are difference-makers on any defensive line. And I think Dre’mont Jones will be the guy that you’ll see used in a variety of ways now with Bosa out. I think you’ll see him bounce around from defensive tackle to nose to defensive end, and they’re going to have to keep an eye on 86 because he can wreck some things for anybody.

But, yeah, there’s a lot to be excited about. And, if Ohio State doesn’t get after McSorley with the defensive line, then it’ll be a challenge to slow him down.

On Haskins being +500 to win the Heisman, betting-wise, and McSorley being +2500

Herbstreit: Well, you know who I picked in August. I picked Trace McSorley, and I picked Penn State to win the Big Ten and actually go into the playoff, and it had everything to do with this game (in the) preseason. And if he’s sitting there at 25-to-1 — let’s put it this way: If we talk next week and they win this game and, in order to win this game he’s going to have to play his tail off and if he plays well in that big a stage, all of a sudden it’s going to be Tua (Tagovailoa) and then they’re going to be talking about Trace McSorley as, “Who’s that other guy?” if Penn State wins this game. Because they’re not going to win without him being a factor in the game. So that’s incredible to realize. I didn’t know he was at 25-to-1. That’s something you’d want to, if you’re interested in that kind of thing, you may want to sniff that one out.

But, Bear, you’re right about Dwayne Haskins. He finally, I think because the OU-Army game didn’t necessarily go the way people thought, I think Kyler Murray didn’t necessarily — he took advantage of the possessions that he had, they just never had the ball. But I think it needs to be said that Dwayne Haskins right now, outside of Justin Herbert, is throwing the ball with velocity and accuracy as well as anybody.

Now, here’s the thing — the TCU game, it was at Jerry Jones’ stadium down in Arlington. It was 70 percent Ohio State fans. Like, they’ve never been tested in this kind of atmosphere until Saturday night. And they might pass with flying colors and we might go, “Holy cow, Dwayne Haskins is a monster,” or we might go, “Ooh, that’s what happens when you go on the road.” One or the other will happen. And I will tell you this: If they don’t pressure him and that crowd’s not a factor in affecting that offensive line, and he’s sitting back there with his feet set, you’re not going to stop him from making huge yards in the passing game.

So, much like we talked about with McSorley and trying to get him out of rhythm, Penn State with that homefield, the White Out, feeding off that energy — the boys up front from Penn State better find a way to get after Haskins and get him off his point. Or he’s going to put up crazy numbers.