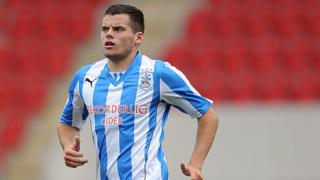 A third man has been arrested on suspicion of murdering a non-league footballer who was attacked during a night out.

Jordan Sinnott, 25, who was on loan at Matlock Town, died in hospital after being found unconscious in Market Place, Retford, on Saturday morning.

Two 21-year-old men were arrested on suspicion of murder. A 20-year-old man is also now being held.

Another man has been charged over a separate assault.

Connor Woodcock, 27, of Beehive Street, Retford, appeared at Mansfield Magistrates' Court on Monday charged with grievous bodily harm and actual bodily harm in connection with an assault thought to have taken place after Mr Sinnott was attacked.

His case has been sent to the crown court, where he will appear on 24 February.

Mr Sinnott was found with a fractured skull at about 02:00 GMT on Saturday and died in hospital at about 18:00 on the same day.

Tributes have been paid to the footballer, who also played for Huddersfield Town, Altrincham, Bury FC, Halifax Town, Chesterfield and Alfreton Town.

Phil Tooley, a former director of Chesterfield FC, said Mr Sinnott – who played for the club between 2017 and 2018 – was a “lovely lad”.

“I was privileged enough to get to know him a bit… he used to light up a room when he came in,” Mr Tooley said.

Matlock Town spokesman Ian Richardson said Mr Sinnott had scored his first hat-trick in his final game and the club was “devastated” by news of his death.

Mr Richardson added: “For a young lad to go for a night out and not come home…is heartbreaking.

“He was a tremendous, polite and courteous lad who liked to be the fun in the dressing room.

“The tributes we've had from far and wide show what a grand lad he was.”

Police no longer believe a fight involving eight men and women at the Dominie Cross pub car park, in Grove Street, just after 23:25, was connected to Mr Sinnott's death.

Mr Sinnott, from Bradford, is the son of former footballer Lee Sinnott.

Earlier this month, he scored the first hat-trick of his career during a game against Basford United.