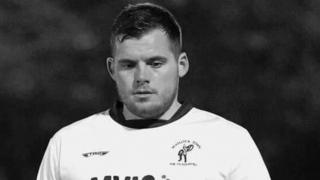 A 21-year-old man has been arrested on suspicion of murder after the death of a non-league footballer who was attacked during a night out.

Jordan Sinnott, 25, who was on loan at Matlock Town, died in hospital after being found unconscious in Market Place, Retford, on Saturday morning.

Two other men, also 21, remain in custody on suspicion of murder.

Tom Sinnott told Radio 1's Newsbeat his brother was “the best person” he had ever known.

Mr Sinnott added he had been “overwhelmed” after asking for donations of football shirts with “Sinnott 25” on the back.

The shirts will be on display at his brother's funeral before they are donated to Sport Relief.

Mr Sinnott said: “He loved football so much. I thought, for his funeral, I want the teams he played for hung up at the funeral because we want to remember everything good about him. Then from that the idea kind of snowballed.”

He said within an hour they had secured donations from Premier League, Championship, League One, League Two and non-league clubs.

“It is overwhelming,” he added. “It just means the world to me to know Jord, even after he passed, is still bringing joy to people even if he didn't know them.”

He said there were “not enough words to describe” his brother, who would have turned 26 on Valentine's Day.

“Out of everyone, he was the best person I ever knew,” he added.

Mr Sinnott was found with a fractured skull at about 02:00 GMT on Saturday and died in hospital at about 18:00 the same day.

Three arrested men remain in custody, while a 20-year-old man was released without charge.