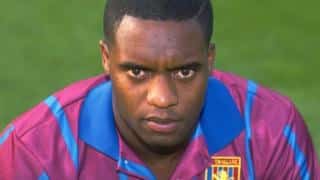 A police officer has been charged with the murder of retired footballer Dalian Atkinson who died after being Tasered.

The ex-Aston Villa striker, 48, was restrained by police officers at his father's house in Telford, Shropshire, on 15 August 2016.

A second police officer, also from the West Mercia Police force, has been charged with assault causing actual bodily harm.

Both constables are due at Birmingham magistrates and crown courts later.

The Crown Prosecution Service (CPS) made the decision to press charges following an investigation by the Independent Office for Police Conduct (IOPC).

The CPS has not named the two police constables as it understands their defence will be applying for them to remain anonymous.

An alternative charge of unlawful act manslaughter has also been put forward by the CPS for the officer charged with murder.

Mr Atkinson's family has been informed, a spokesperson said, and issued a statement welcoming the decision but they “regret that already more than three years have passed since Dalian died”.

Police officers attended Meadows Close in Trench, Telford, where Mr Atkinson was detained outside an address at about 01:30 BST.

He was taken by ambulance to the Princess Royal Hospital where he later died.

Relatives said the footballer was suffering from a number of health issues and had a weak heart when the Taser was deployed.

He is best remembered for scoring the Match of the Day goal of the season in 1992-93 when he dribbled the ball from inside his own half before chipping the Wimbledon keeper from the edge of the penalty area.

In a statement, West Mercia Police said: “Our thoughts continue to remain with the family and friends of Dalian Atkinson at this difficult time”.

Chief Constable Anthony Bangham said it would not be appropriate to comment on the circumstances around Mr Atkinson's death, but added he would ensure the officers in question “have the appropriate support throughout the forthcoming criminal justice process”.

The IOPC said it appreciates the “patience” shown during their investigation, which concluded in October 2018.

A actions of a third police officer, who was also investigated over Mr Atkinson's death, were not referred to the CPS, the watchdog added.