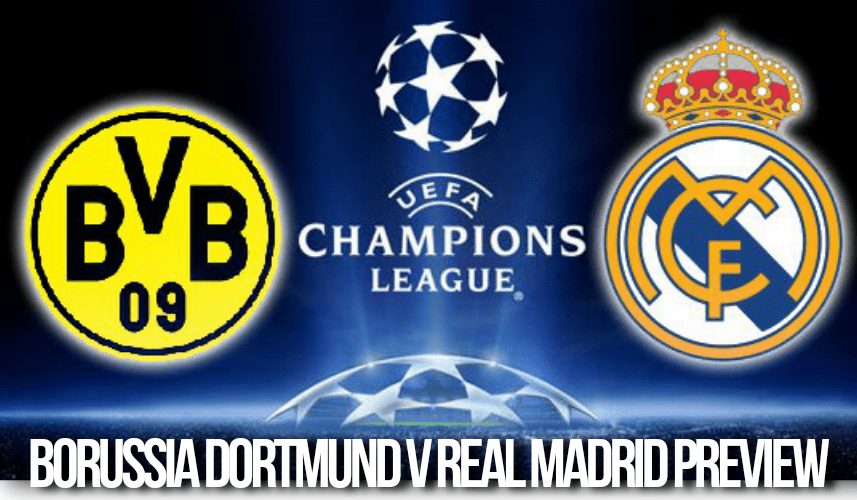 Keeping in perspective the departure of Ousmane Dembele to Barcelona. The prolonged injuries to key players like Marco Reus, Andre Schürrle, Mario Gotze and Marc Bartra. Borussia Dortmund will not be too unhappy with the 1-3 result of their opening UEFA Champions League fixture against Tottenham Hotspur at Wembley, London a fortnight ago. The Black and Yellows are satisfied that they came up with an away goal. Against 11-time champions Real Madrid, whom they will host for their second UEFA Champions group outing. Borussia will need folks like Schurrle, Gotze and Batra in full fitness. Especially if they are to put up any resistance to the Spanish giants.

Die Schwarzgelben have leapt to the top of the Bundesliga table by beating Hamburg SV 0-3 last Wednesday. Forwards Pierre-Emerick Aubameyang and Christian Pulisic, the scorers in the Hamburg outing, have looked very impressive of late and even without the club stalwarts around, have the potential to trouble Real's defensive ranks. Dortmund have scored as many as 13 goals from their five Bundesliga outings in the current season. Aubameyang alone has struck five. The defensive line-up lead by the likes of Lukasz Piszczek and Sokratis Papastathopoulos has performed magnificently. The clean sheet that Borussia have maintained in their domestic outings is a testimony to that. But even that could come under pressure at Signal Iduna Park on Tuesday in the face of some of the world's best attackers.

But the recent form of the Los Balancos seem to suggest that the Spanish and European champions are really struggling. A shock 0-1 home defeat to minions Real Betis have left Real squirming at the 7th spot of the La Liga table after five games, that surprisingly has only two wins.

Christiano Ronaldo, Gareth Bale, Isco and Toni Kroos have been off-color upfront. Even their 3-0 win against Greek side APOEL at the Bernabeu in their UEFA group clash, they look less than convincing. Despite 70 per cent possession and 27 attempts on the rival goal, it was Ronaldo's brace (one of which was a penalty) that gave the home team a respectable lead.

As for La Liga minions Real Betis, their 12 attempts on the Real goal and four of them on target seem to suggest quite some shakiness in the Carvajal-Varane-Ramos combine at the back.

From the looks of it, these seem like weaknesses that could be exploited to the hilt by Dortmund's Aubameyang, Schurrle & co. But easier said than done. Los Blancos are the among the most formidable opponents in the Champions League format. This despite having the reputation of being shaky starters. Real will be without the services of the threatening Karim Benzema upfront, out with a hamstring injury for at least a fortnight more. While there could be a possibility of Dortmund enjoying possession for considerable part of Tuesday's game. They will have to look out for the blistering “hit on the breaks” runs initiated by the likes of Marcello, Luka Modric and Casemiro, because that's when Real gets its goals.

Borussia Dortmund have proved to be difficult opponents in the past. They have lost just two and won three of the last seven encounters with the Spanish giants. In fact, they remain unbeaten in the previous three. UK Bookmakers’ odds point to a Real Madrid win on September 26. However with the raucous crowd at the Signal Iduna Park behind them and history playing its part, one cannot rule out a Dortmund shock for the visitors.