The French open kicked off on Monday, May 24th and could see an overwhelming legacy being bolstered when 13-time winner at the Roland Garros, Rafael Nadal stakes his claim for one more trophy at the venue.

At 5/6 (SkyBet), the 34-year-old Rafa is the bookmakers‘ favourite to take the trophy for an incredible 14th time. The clay court colossus has a win/loss ratio of 100/2 which translates into a mind-numbing 98 per cent success rate. Despite being ranked No.1 in the ATP rankings and 1400 points of the 3rd placed Nadal, Serbian Novak Djokovic is the next favourite at 7/2 (SkyBet).

In his 17-year-long career that's peppered with as many as 18 Grand slams, the 33-year old tennis superstar has only one title win to show at the Roland Garros which was way back in 2016.

With not too many years of his playing left, this could be the best chance for “Djoko” to show he is a clay court master, too.

Dominic Thiem, ranked World No.4 on the ATP rankings is the 3rd favourite of the bookmakers. The 27-year old Austrian can be considered a clay court specialist of sorts having reached the semi-finals of the French tournament in 2016 & 2017 and the finals in 2018 & 2019.

Fast-rising Greek youngster Stefanos Tsitsipas is the fourth favourite of the bookmakers at odds of 15/2 (SkyBet) to take the Fench open title.

The 22-year-old Tsitsipas, who lost to Djokovic in a rain-interrupted Internazionali BNL d'Italia quarter-final last week, has compiled a 29-8 match record this season.

At Roland Garros, he has a win/loss ratio of 9/4 from his last four participations in the French Open.

But semi-final and final entries in his last last two Grand Slam outings, viz. the US Open in 2020 and the Australian Open early this year have bolstered his rankings and confidence going into Roland Garros this week.

Despite being World No. 2, the 6ft,6in Daniil Medvedev, is considered a struggler on clay court and at odds of 50/1 (SkyBet) is even behind the aging Roger Federer (40/1).

Though the draw is still to be announced and could shift the balance of power in favour of the Russian, he is listed with modest odds, for his lack of success on clay courts is well-documented with first round French Open exits in 2017, 2018, 2019 & 2020.

One of the all-time greats of the sport, Roger Federer at 39, is well past his prime.

Winner of 20 Grand Slams, Federer's last one came in the Australian Open in January 2018. A master on surfaces of all kinds, the Swiss hasn't had a stellar record at the Roland Garros having won the French Open just once, that too more than a decade back in 2009. 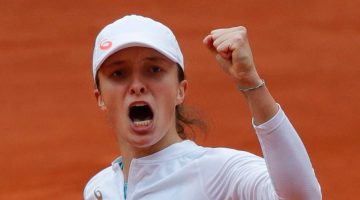