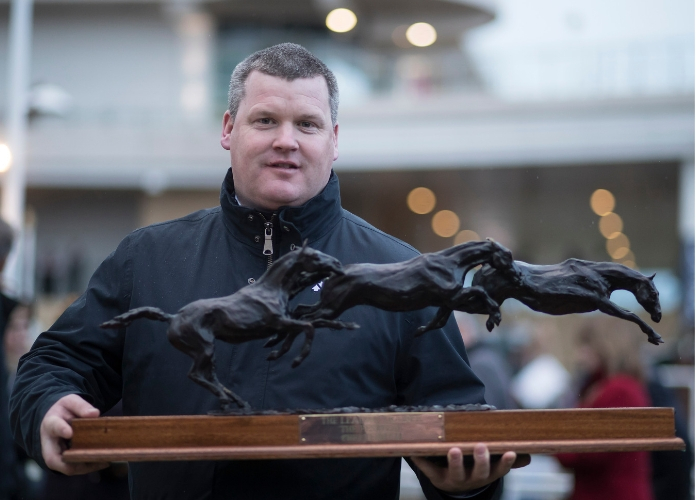 
We preview the main chances for the leading Trainers at Cheltenham this year. Will it be another victory for the Irish led by Gordon Elliott and Willie Mullins?

Gordon is chasing a third straight leading trainer title at the festival. He trained six winners in 2017 and then a jaw-dropping 8 last year. It’s quite difficult to know how many runners he’ll have or the exact races they may all run in. However, one thing for certain is that we’ll see Gordon in the winner’s enclosure during the week.

Of these Tiger Roll looks the pick to add another Cheltenham win to his CV. Ucello Conti is a very classy individual on his day and looks the pick the hunter chase division. Obviously, Apple’s Jade has been very impressive all season and has a live chance in the Champion Hurdle. The pick of his handicap runners looks to be Measureofmydreams in the Kim Muir.

Willie will be looking to regain his title this season but by his own admission his slack on numbers in comparison to other years. That being said, he’s still got a lot of quality horses at his disposal, chief among them perhaps Faugheen who should go lose in the Stayers’ Hurdle.

Benie Des Dieux looks the pick of Willie’s brigade this season but his strong team is bolstered by Laurina in the Champion Hurdle and the ever-popular Faugheen in the Stayers’ Hurdle.

If Henry decides to send Monalee to the Ryanair rather than the Gold Cup then I think it his best chance of a winner at the festival. Chris’s Dream is another horse that must run well in the RSA Chase. Finally if Paloma Blue finds some improvement, he could be a strong player in the Arkle.

The O’Brien string has been in fantastic form, well since he took out his licence really. The young trainer’s juveniles have been particularly strong this season, with the Triumph Hurdle and Fred Winter looking at his mercy.

Sir Eric looks the pick of the O’Brien travelling party but should he fail to win, Meticulous could prove his best chance of a winner in he Champion bumper.

Paul Nicholls has been leading trainer at the festival on five occasions but not since 2009. Some of the races on his glittering CV include the Supreme, Gold Cup, World Hurdle and Triumph Hurdle to name but a few.

Give Me A Copper looks to be Paul Nicholls best chance of a winner for the week. Of the rest Cyrname is the top-rated chaser around and Brio Conti could be well handicapped in the Coral Cup.

Nicky has got a formidable team going to Prestbury Park next week. It seems that he’s got a leading chance in nearly every race and his undoubtedly a trainer to follow.

Altior is obviously Nicky’s best chance of a winner but he’s no price. If I was to do a Betfred Lucky 15 with his runners, I’d put in Ok Corral, River Wylde, Santini and Wahtswrongwithyou. All must have big chances and I haven’t even mention the dual Champion Hurdler Buveur D’Air.

Colin Tizzard has been one of the real emerging forces in the training ranks with the likes of Thistlecrack and Cue Card. He also took last season’s Gold Cup with Native River

Native River will be looking for back to back Gold Cups and should go close once again. I think Tizzard’s best chance of the week comes in the JLT with Lostintranslation. The imposing gelding has improved with each run and should appreciate the Cheltenham hill.

Skelton landed the County Hurdle last season with Mohaayed under Bridget Andrews. The pair will be looking for back to back victories this year but will also be represented by the smart Beakstown.