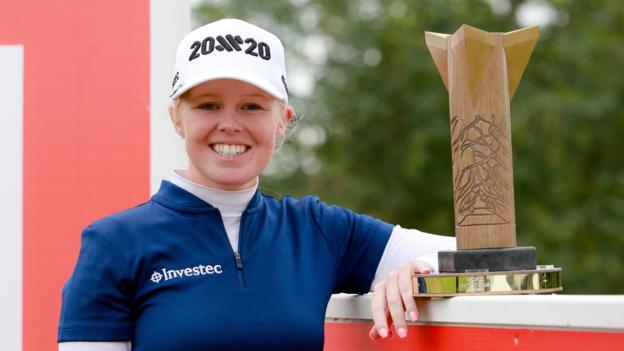 But Stephanie Meadow dealt with the pressure of seeing her face on the billboards in Northern Ireland this week in a fashion that suggests the 27-year-old's career is genuinely back on track after some difficult times.

Not that it was all plain sailing as Charley Hull's final-day rally threatened to wrestle the inaugural World Invitational women's title from the Jordanstown woman.

In the end, the Englishwoman had a six-foot eagle putt on the 18th to force a play-off after a sensational three-wood second shot but it failed to drop as Meadow celebrated victory in her first outing in the paid ranks in Northern Ireland.

“No comment,” laughed Meadow, when asked whether she might consider proffering advice to McIlroy on how to carry the home mantle.

But there was no hiding the emotion that this success engendered for Meadow after the pain of losing her father to cancer in 2015 and a subsequent back injury which affected her game.

Her father's death – after being diagnosed with cancer only four months before – was a huge blow after all the sacrifices her parents had made so she could pursue her promising golf career.

The family relocated to Hilton Head Island in South Carolina to allow a 14-year-old Meadow to follow her golfing dream and eight years later, the Northern Irishwoman was finishing a remarkable third on her professional debut at the Women's US Open at Pinehurst, only a couple of shots behind winner Michelle Wie.

‘I wasn't ready to play'

But within a year, her father passed away and the emotional toll was huge for Meadow as she found herself crying while standing over a fairway wood shot at an LPGA event in Canada a couple of weeks later.

“I just wasn't ready to play. It was just too raw and too fresh at that point,” Meadow recalled in a BBC Sport Northern Ireland interview in January 2017.

The grieving Meadow didn't win a dollar during her remaining nine events in 2015 as she missed every cut.

And while she did represent Ireland at the 2016 Olympics, the back stress fracture wrecked her 2017 campaign as she lost her LPGA Tour card in the US before regrouping to clinch a victory on the second-tier Symetra Tour in the States in 2018.

“It's been a long journey up and down for sure. This win will give me a lot of confidence. It's a pity it didn't matter on the LPGA. I wish it did.

“I've got a little bit of work to do to maintain my card. Hopefully I can use this win as momentum.

“I've played against Charley Hull – one of the best players in the world. If I can do it against her, I can do it out there as well so it's big for me confidence wise.”

As a one-off, Meadow had her American boyfriend Kyle Kallan on the bag although he will be working with his new employer Jennifer Kupcho in Canada this week after splitting with Paula Creamer.

“It was nice to share that experience with him,” said Meadow after her triumph.

Getting away from golf during moments on Sunday helped to maintain Meadow's calm as Hull threatened to reel her in.

“We were just talking about how we're going to get the rental car to the airport tonight before we take the bus to Dublin. Just normal life stuff.”

Groundbreaking tournament hopes to ‘kick on'

After extending her four-shot overnight lead to five, Meadow's advantage was suddenly trimmed to only two by the 10th tee after an errant fairway wood shot on nine led to a penalty drop and subsequent double bogey.

“I missed it a little right but it got a pretty bad bounce off a tree into some pretty nasty stuff over there.

“I definitely hit worse shots this week that ended up ok. But that's just golf and I told myself that and was able to get back and birdie the next two holes.”

The late drama saw Meadow almost losing a three-shot lead that she had on the 17th tee but the record books will show she won the inaugural World Invitational women's title.

As for an overview of the event which saw separate men's and women's tournaments with equal prize money for the first time in Europe, tournament backer and pop star Niall Horan is convinced it has been a success.

“It really felt natural out there. Even the idea of a male group and then a female group and so on really worked,” said Horan, who fronts the Modest Golf management agency centrally involved in the event.

“People around the world are watching this. They are seeing what we are doing and hopefully we can kick on and make this even a bigger event for more money.

“It's something that only came together over the last six or eight months and to do what we did was going to be a big gamble.

“But we had a huge sponsor is ISPS Handa coming on board. A company that have been changing the game in golf in general for a long time. To get them on board and get equal pay for the ladies was a big thing for us.”