Robert MacIntyre finishes second at Made In Denmark 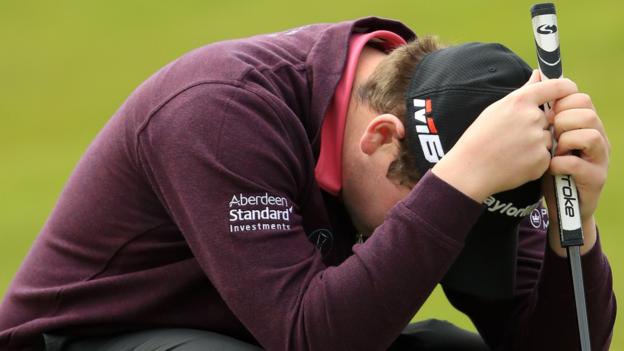 Scotland's Robert MacIntyre finished runner-up for the second successive tournament after being pipped to Made in Denmark glory by Bernd Wiesberger.

MacIntyre began the final round a shot adrift and the pair were tied on 14 under par with three holes to play.

But MacIntyre's drive out of bounds on the 17th cost him a bogey – the only blemish in his 66 – and the chance of a first European Tour title.

Frenchman Romain Langasque was third at 11 under par.

MacIntyre ended one shot behind Wiesberger after narrowly missing a long birdie putt on the last.

Playing his debut season on the Euro Tour, he banked the biggest pay day of his career with second place at the British Masters earlier this month to secure his card for next season.

The Made in Demark title is a fifth Euro Tour triumph for Austria's Wiesberger and his first since returning from a seven-month lay-off with a wrist injury last season.

“I didn't expect it all, I had a rough year last year,” he said. “It's up there. Thinking about what was going on in the last year.”

Englishmen Chris Paisley and Oliver Wilson were tied on nine under par with Irishman Paul Dunne, Pablo Larrazabal (Spain) and Max Scmitt (Germany) for a share of fourth place.

Of MacIntyre's compatriots, Richie Ramsay closed with a 68 for a share of 12th place on seven under, while Grant Forrest posted 69 to finish four under. Scott Jamieson was two strokes further back following a 73.