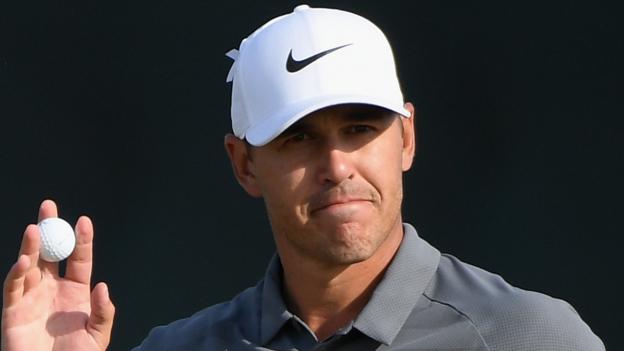 Brooks Koepka has been named PGA of America player of the year for the second successive season.

Koepka edged out Rory McIlroy for the award despite the Northern Irishman's triumph at the Tour Championship in Atlanta on Sunday.

The duo are also certain to be the two main contenders for the prestigious PGA Tour's player of the year award which is being voted on by their peers.

The PGA of America's points system saw Koepka narrowly ahead of McIlroy.

Both players won three events in 2019 but the PGA of America uses a system that awards points for victories, scoring average and position on the season-long money list, which concluded before the Tour Championship.

World number one Koepka successfully defended his US PGA title in May in addition to winning the World Golf Championship St Jude Invitational and the CJ Cup.

Those three wins earned more points, under the the PGA of America's formula, than McIlroy's victories in the Players Championship, Canadian Open and Sunday's Tour Championship.

The American was also runner-up at the Masters and US Open and shared fourth place at the Open Championship, with McIlroy's best major finish in 2018 an eighth place at the US PGA.

Players are being balloted in the PGA Tour's player of the year award with an announcement expected in the coming weeks.

Koepka is the first player to win successive PGA of America player of the year awards since Tiger Woods in 2007.

McIlroy will be back in action in Europe this week in the European Masters at Crans-sur-Sierre in Switzerland.