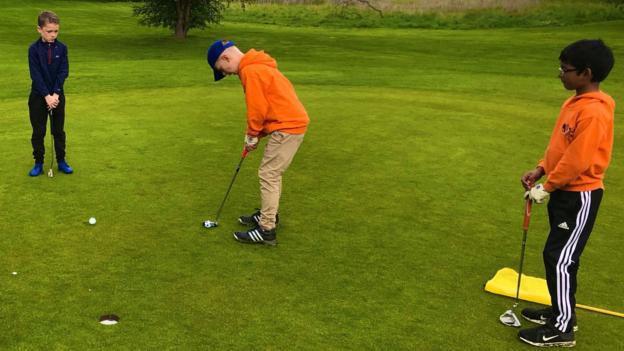 A junior golf coach says club officials are “stuck in the 19th century” after he was criticised for letting children play in tracksuit bottoms and hoodies.

Thomas Devine posted a picture on Twitter of some of his young students practising their putting.

And while many supported him, the image drew criticism from traditionalists for ignoring the sport's dress code.

“If they feel comfortable in trainers and a hoodie then that's the way we should allow them to dress,” he said.

Devine, who runs a ‘Future Elite' programme at Oulton Hall in Yorkshire, added: “It's important when these youngsters are six, seven, eight, that any barriers to them feeling interested in or enthused about golf are removed – and that involves the way they dress. If they feel comfortable in trainers and a hoodie then that's the way we should allow them to dress.

“At that age they just want to play. What's more, I believe we should remove the barrier of cost by allowing children to wear their everyday clothing. We are coaching 21st-century children – we are not stuck in the 19th century and only accepting the offspring of the privileged classes.

Devine regularly teaches more than 170 juniors, aged between five and 16, each week, and says he has has never had any complaints about the relaxed dress code.

“The irony of these people using a 21st-century technology to criticise those of us who are moving with the times and embracing change appears lost on them,” he said.

“We will continue to allow the youngsters to wear what they're comfortable in, whether it's trackie bottoms and a T-shirt or tailored golf trousers and a £60 branded polo.”

While the official rules of golf only outlaw clothing which can give players an advantage – for example, kinetic clothing which releases energy – many golf clubs enforce dress codes to maintain the ‘tradition' of the sport.

Golf authorities have said they are looking to modernise the game to make it more accessible. A new, easier to understand rulebook came into force in January while governing body the R&A last year outlined new plans to widen the sport's appeal and promised to invest £200m in doing so over the next decade.

The 2019 Open will be played at Royal Portrush, which has the following dress code: