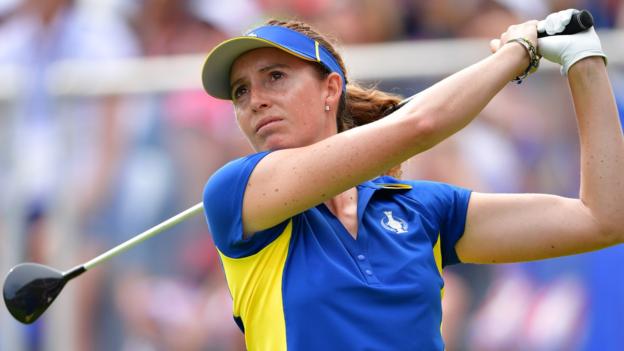 Solheim Cup golfer Florentyna Parker is taking a novel approach to improve her game – by working at the men's European Tour event next week as a caddie.

The Englishwoman tweeted the men's Tour as she looks for a temporary career change.

Parker, who played in the Solheim Cup two years ago, is keen to find a bag at the European Open in Hamburg, beginning on 5 September.

“I've been struggling a bit and I want a different perspective,” she said.

Parker played for Europe in the 2017 match in Des Moines, which the USA won 16½-11½ after finishing second in the qualification period to make the team.

But she has not played well enough to earn a place in captain Catriona Matthew's team at Gleneagles next month and her world ranking has dropped to 448.

The 30-year-old lives in Hamburg and is available to caddie because the next event on the Ladies European Tour, the Open de France, does not start until 19 September.

“I'll be at the tournament anyway so if it doesn't happen, I'll watch from outside the ropes,” she told BBC Sport. “But it would be a chance to work with someone up close and learn something I can take into my own game. I want to see how another player thinks.

“I'm not looking to take anyone's job. There are no local caddies in Germany and I know circumstances change and there is usually someone who needs a caddie at the last minute.”

Parker has won three times on the LET and competed against the men in the Golf Sixes event in Portugal in June.