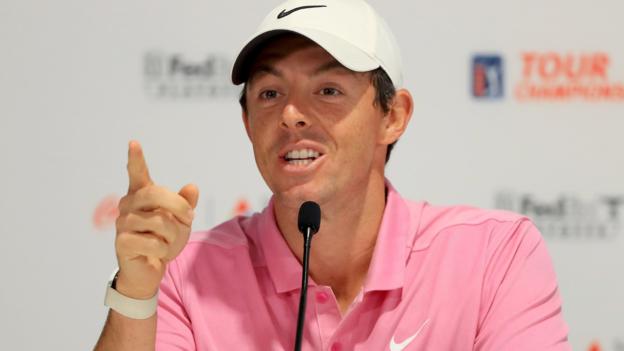 Rory McIlroy says he is unsure about the new format at the season-ending Tour Championship and has questioned the $15m prize on offer for the winner.

Only the top 30 on the PGA Tour's FedEx Cup points list qualified to play in Atlanta, with players' starting scores then staggered by their position.

It means Justin Thomas, who won the BMW Championship on Sunday, begins at 10 under par with a two-stroke advantage.

Northern Ireland's McIlroy, fifth in the standings, starts at five under.

“You can shoot the best score of the week and not win the golf tournament,” McIlroy said.

“If that happens to someone it's going to be hard for them to wrap their head around.”

Patrick Cantlay is second in the standings and will start at eight under par on Thursday at East Lake Golf Club, with fellow American and world number one Brooks Koepka at seven under.

Starting scores then work on a sliding scale down to the players in 26th to 30th, who begin on level par.

“There isn't a person on the planet that's experienced this before, for the stakes it's for,” said American leader Thomas. “I'm just going to try to deal with it the best I can.”

The “Starting Strokes” format has been introduced with the intention of eliminating the confusion of past FedEx play-offs, when the winner of the final tournament was often different from the series champion.

World number three McIlroy, 30, says he has spoken to sponsors about how the FedEx Cup's “legacy” compares to golf's four majors.

Referring to the PGA Tour's intention for the tournament to have a legacy as the final element of the ‘season of championships', the run of tournaments that takes in the Players Championship, four majors and then FedEx Cup, McIlroy queried whether having players start on different scores was “the best way to do it”.

“I get it from a fan experience point of view,” he said. “I get it from giving guys that have played better throughout the year an advantage, but I don't know… come back to me on Monday and I'll tell you if it has worked or not.”

The Tour Championship winner will take home $15m (£12.3m), increased from $10m last year, but McIlroy says “it doesn't need to be about the money, it should be about the prestige of winning an event that you'll be remembered for”.

“Who knows what the winner wins at the Masters? I don't know because that's not what it's about,” he said.

“The money's great but I'll get more satisfaction from winning the golf tournament and playing well. I don't think the money needs to be front and centre because I don't think that's what the fans care about.

“It's definitely a thought that came into my head, ‘how can we make ourselves more relatable to the fans?', and having $15m front and centre isn't probably the best way to do it.”

Masters champion Tiger Woods and Open winner Shane Lowry both failed to qualify for the top 30 over the course of the season.

“I want to emphasise the fact that what Tiger and Shane did this year, those are two of the greatest stories of the year. So would you want them here? 1,000%,” said PGA Tour commissioner Jay Monahan.

“But you look at every other sport and their play-off format, and you'll have top teams that fall out early. You'll have some things that you may not have predicted, particularly at the moment when they won those two big events.

“You've got to play exceedingly well over the course of an entire season, and, with volatility, there's risk.”