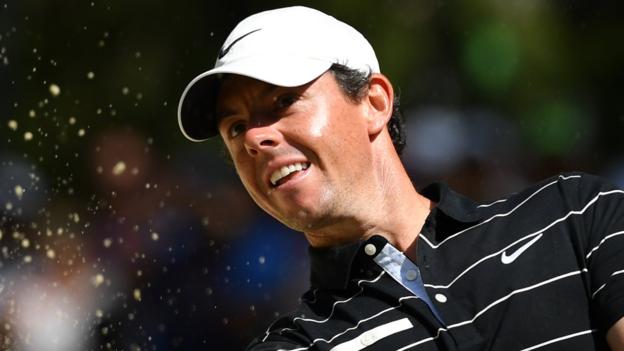 Rory McIlroy found water twice in the closing five holes on day three at the European Masters in Switzerland to drop three behind leader Andres Romero.

McIlroy had shared the lead on 13 under after 13 holes before his poor finish.

He needed to hole a 10-foot bogey putt at the last after finding a greenside lake to finish on 11 under following a one-under-par 69 at Crans-sur-Sierre.

Argentina's Romero leads Wade Ormsby by one on 14 under with Tommy Fleetwood and Malaysia's Gavin Green on 12 under.

After firing a nine-under-par 61 on Friday, Romero, now ranked 735th in the world, signed for a 66 after a run of three birdies and an eagle in four holes from the 13th.

Romero won his second European Tour title a decade after his first at the 2017 BMW International Open but has had just one top 10 since and sits 168th in this season's Race to Dubai.

Australian Ormsby dropped one behind the Argentine after a three-putt bogey at the last saw him card a 67 while Fleetwood, seeking his first win of 2019, and Green both recovered from poor starts to remain in contention.

World number two McIlroy looked on course to take control of the tournament as he played his opening 13 holes in three under before firing a huge 415-yard drive down the par-five 14th.

However, inexplicably the Northern Irishman leaked his 129-yard second shot right and into a greenside lake as he chased a dangerous pin.

After regrouping with a birdie on the par-five 15th, McIlroy found bunkers off the tee on his final two holes as he flew his second shot from the sand over the back of the 17th before chunking his approach into the water at the last.

McIlroy is in a group sharing fifth which includes this year's Andalucia Masters winner, South African Christiaan Bezuidenhout, and Finland's Kalle Samooja, who fired a 62 on Saturday.

Sergio Garcia kept his hopes alive by playing his final 12 holes on Saturday in seven under to card a 66 as he finished four off the pace.

Italy's Renato Paratore is also in the group on 10 under after a 67 that included a hole in one at the 13th.

McIlroy won the Tour Championship in the US last Sunday to secure a prize of £12.2m and the Northern Irishman felt the exertions at the play-offs on the PGA Tour caught up with him on Saturday.

“I felt a bit flat out there. A little bit tired,” McIlroy told Sky Sports.

“I'm looking forward to getting into bed early tonight and getting a good night's sleep.

“But I'm not of it. If I can play a good front nine tomorrow, I'll still be right in it.”