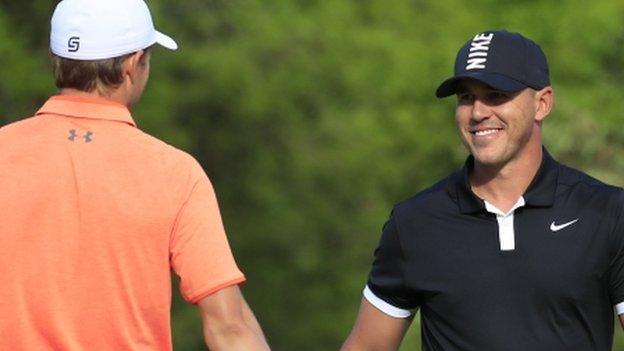 Brooks Koepka says he has no doubts he will defend his US PGA Championship title on Sunday after maintaining his seven-shot lead in round three.

Starting on 12 under, the American showed the first signs of vulnerability during a level-par third round of 70 but his rivals failed to gain ground.

World number one Dustin Johnson (69) is among four tied for second while Jordan Spieth (72) slipped to three under.

England's Matt Wallace shot a 70 and is the leading European on four under.

Wallace is the only European in the top 14 on the leaderboard after fellow Englishmen Justin Rose (73) and Tommy Fleetwood (72) went backwards at Bethpage's Black Course in New York state.

Koepka is chasing a fourth major victory in his last eight starts and, because of the US PGA Championship's move from August to May, the 29-year-old can become the first player to hold back-to-back titles in two majors at the same time following his US Open wins in 2017 and 2018.

His seven-shot lead is a record after 54 holes of the US PGA Championship, and no golfer in major championship history has failed to win after holding such a margin.

“I couldn't care less about breaking records,” he said. “If they come that's awesome but I'm just trying to win.”

Johnson, whose sole major win came at the 2016 US Open, was joined on five under by relatively unknown Americans Harold Varner III (67) and Luke List (69) and Thailand's Jazz Janewattananond (67).

Australian Adam Scott (72) was another major winner to falter after he and Spieth, who is chasing a career Grand Slam, began Saturday's round joint second on five under.

Earlier, Northern Ireland's Rory McIlroy carded his first under-par round of the championship with a 69, to sit on two over.

Koepka's smile on 13 tells its own story

Koepka had looked unbeatable over the first two rounds, but in bright sunshine on the Long Island course, his unerring accuracy from the tee began to slip.

Having taken 28 holes to register his first bogey, he wracked up two on the trot on the ninth and 10th holes.

That coincided with world number 76 List mounting a challenge with three successive birdies on the back nine to get to seven under and reduce Koepka's lead to five.

Johnson also reached seven under after four birdies on his opening nine holes.

But by the time of Koepka's wobble he had already holed birdie putts on the second and fifth, and when he drained another on the 13th, a broad smile broke out across his otherwise stern-looking face.

That four on the par-five came after a wild tee shot and a second that found further rough. But he heaved a wedge to within 16 feet before showing that his touch on the greens had not left him and it would still take a huge effort from his rivals to catch him.

The leader may well also be helped by Johnson's bogey on the last, meaning the 34-year-old will not be in the final pairing on Sunday.

Instead, Koepka will be joined by world number 174 Varner III, who is competing in his fifth major and has a best finish of joint 66th at the 2016 Open Championship.

Rose among Europeans to go backwards

The rise of Varner III, List and world number 72 Janewattananond were notable on a day when others failed to get to grips with a course which continued to punish errant driving.

Wallace carded three bogies, including one on the first, and three birdies in a mixed day on the greens.

But his ability to stay in touch of the chasing pack owed much to his tenacity, and he showed his character when throwing his ball into the crowd after a birdie in the 15th.

“That's one of the toughest days I've had on a golf course in a while,” Wallace told Sky Sports. “This course is brutal.

“I really saw it because I wasn't quite on it. I felt like I was swinging decent but then I was just off line and was on the edge of fairways.”

Rose, who was sporting a shirt with blue pineapples printed on it, struggled with the putter and dropped from three under to level par in the space of four holes, which included a double bogey on the par-three 14th.

Fleetwood also finished on level par after a steady front nine before successive bogeys on the 15th and 16th holes left the Southport golfer looking frustrated.