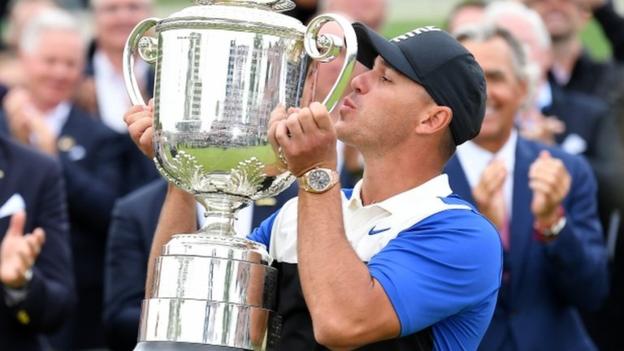 Brooks Koepka held off world number one Dustin Johnson to retain his US PGA Championship title and win a fourth major on a dramatic day at Bethpage.

The 2017 and 2018 US Open champion, who had a seven-shot lead at the start of the final round, saw that cut to one after four bogeys from the 11th.

But Johnson dropped shots on the 16th and 17th as Koepka, who carded a four-over 74, won by two on eight under.

England's Matt Wallace tied for third, earning his best finish at a major.

The 29-year-old signed for a two-over 72 to finish on two under, alongside Americans Jordan Spieth (71) and Patrick Cantley (71).

The top six were the only golfers to finish the tournament under par at the brutal Black Course, which was made even harder on the final day with the wind gusting up to 35mph.

Northern Ireland's Rory McIlroy and Ireland's Shane Lowry were among those to finish joint eighth on one over after both ended with 69s.

World number three Koepka, who earned a winner's cheque of $1.98m (£1.56m) and became the first person to successfully defend the US PGA Championship and the US Open, said: “I'm just glad we didn't have to play any more holes. That was a stressful round of golf.

“I'm glad to have this trophy back in my hands. With the ‘DJ' chants, I was aware of what was going on. He did an unbelievable job of putting pressure on me.

“When they started chanting for DJ on the 14th, it actually helped. It helped me focus. I think it was the best thing that could've happened.”

When asked if it surprised him, Koepka replied: “It's New York. What do you expect when you're half-choking it away?”

Final round comes to life at Bethpage

After an almost processional opening three rounds at the Long Island course in New York state where Koepka dominated, the tournament came to life during the final round as the wind stiffened and Johnson, playing a couple of groups ahead, finally applied pressure.

Koepka's stern demeanour looked unshakeable as he set the lowest 36-hole score in majors to take a seven-shot lead, a margin which remained after the third round when he shot a level-par 70 because his rivals were unable to mount a serious challenge.

But on Sunday's back nine his driving was erratic and his approach play and putting withered.

Johnson, who holed three birdies on the front nine, closed within one with another birdie on the 15th. However, the 2016 US Open champion then handed the advantage back to Koepka with bogeys on the 16th and 17th holes and he has now finished runner-up at each of golf's four men's majors.

It was still a nervy finish for Koepka, who also bogeyed the 17th to hold a two-shot lead with one to play.

He then hit his tee shot into a fairway bunker down the last.

However, a good recovery to the middle of the fairway and a chip on to the green helped him finish with a par to win the Wanamaker Trophy.

Koepka, who led from start to finish, has now won four majors in his previous eight starts – only legends Ben Hogan, Jack Nicklaus and Tiger Woods can match or better that record.

Questions will remain about 34-year-old Johnson's ability to add to his solitary major, given the back nine collapse from Koepka.

Once the leader chalked up a fourth straight bogey on the 14th, Johnson almost immediately faltered on the 16th, failing to hole a seven-foot par putt as he also dropped a shot.

He then missed the green on the par-three 17th, which resulted in another bogey and that was the end of his challenge.

Koepka found his range from the tee to par the 15th and 16th holes, and although another dropped shot followed on the 17th, by then Johnson was in the scorer's hut checking his card.

“With this golf course and this amount of wind, it's definitely one of the tougher days we've played,” said Johnson.

The tournament was also a return to form for Spieth, who needs to win the US PGA Championship to complete a career Grand Slam.

The 25-year-old was the last player to win a major from start to finish, at the 2015 Masters, but has failed to post a top-10 finish on the PGA Tour since finishing tied ninth at the 2018 Open Championship.

“This is the best I've felt in quite a while,” he said. “I put in more hours over the last five months than I ever have, just trying to get to where I can be out here on a major championship Sunday and contending.”

Wallace a shining light for Europe

Although McIlroy and Lowry shone over the course of the weekend with successive under-par rounds, Wallace was the only genuine European contender down the final nine holes.

Having almost won at the British Masters in Southport last weekend, where he apologised for showing his frustration after a missed putt on the last, the three-time European Tour winner proved that he can compete with the world's best.

Despite being a player who likes to chase a score, rather than stay patient as many advised at Bethpage's Black Course, he reached the turn at five under and looked set to improve on that after negotiating the tough 10th and 11th holes in par.

But a double bogey on the 12th was a round-spoiler and a further bogey on 17 denied him a possible third-place finish on his own.

Fellow Englishmen Justin Rose, Tommy Fleetwood, and Danny Willett all started the day on level par, but Rose's 75, Fleetwood's 78 and Willett's 77 meant they all finished way down the leaderboard.

Willett, who had been two under after eight holes, then triple bogeyed the ninth before a double bogey on 11.

“That was hard,” Wallace told Sky Sports. “I had a little wobble on 12 mentally and had to knuckle down. It was tough at the end, I don't think I hit a green in regulation but it was satisfying for sure.

“I'm buzzing for the next major. I've shown that I can compete. I'm a little bit far away from the leaders but that's a few putts here and there. I feel I'm right there mentally. The approach is going right and hopefully I can do that at the next tournament.”

McIlroy added: “I'm proud of myself, I didn't let my head drop and I tried to the very end.

“Today was a nice way to finish. It was a really hard day to putt because of the wind, so there was a little less expectation. I just sort of let it go.”