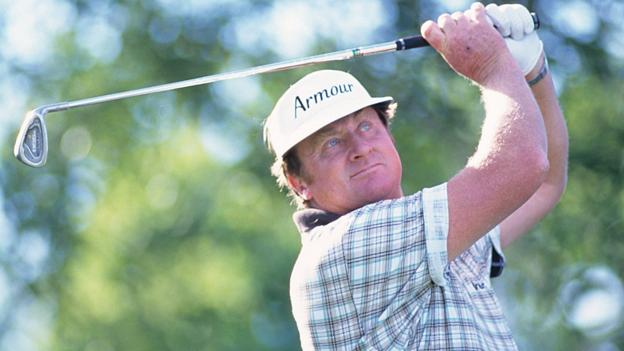 He was best known for beating Jack Nicklaus twice in a day during the 1975 match against the United States.

Barnes played for Great Britain & Ireland and then Europe in six Ryder Cups between 1969 and 1979 and won 20 professional titles.

Born in Surrey, he represented Scotland in team events and recorded three top-10 finishes at the Open Championship.

Barnes won the Senior British Open in 1995 and became the first man to defend the title the following year.

Paying tribute after his death, brother-in-law Guy Faulkner, said: “It was very sudden. I played a round of golf with him in May and he played 18 holes with no problem at all.”

Bernard Gallacher, who partnered Barnes at four Ryder Cups, said he was one of his best friends.

“I knew Brian ever since I turned pro back in 1968 and we often played practice rounds together. In some ways they were more enjoyable than the tournaments,” he said.

“He was a terrific driver of the ball – long and straight – and if he had enjoyed travelling more, he had the potential to be one of the best players in the world.”

At the 1975 Ryder Cup in Pennsylvania, Barnes beat reigning Masters and US PGA champion Nicklaus 4&2 in the morning singles.

Nicklaus was keen for a rematch and asked US captain Arnold Palmer to make it happen.

On the first tee Nicklaus confidently told his opponent: “There ain't no way you're going to beat me again” – but Barnes triumphed 2&1, although the US went on to win the Ryder Cup.

Barnes was a larger-than-life character who was known to like a drink and famously marked his ball on the final hole of the 1982 Scottish Professional Championship with a beer can, before putting out for the win.

He would regularly tee off with a bottle of vodka and orange juice in his bag and one year – at the Zambia Open – downed three pints in the clubhouse, checked his watch and headed for the door.

He eventually received treatment for alcoholism in 1993 and became became eligible for the Senior Tour in 1995.