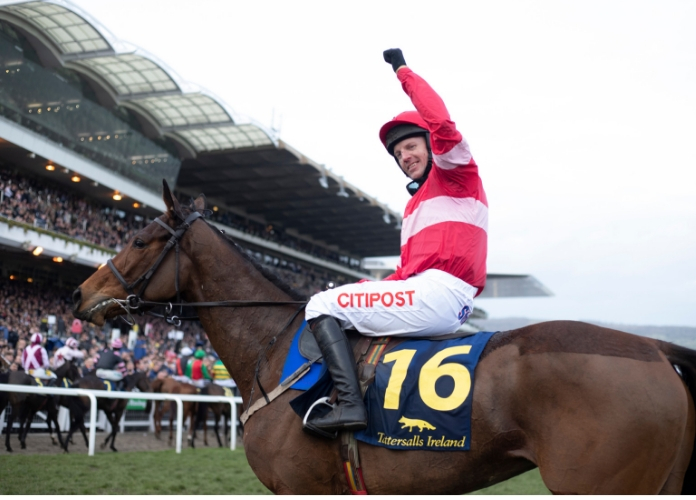 It was a pretty quiet week on the racing front with many nursing Cheltenham hangovers and already looking forward to next years festival. There is still plenty of top quality action to look forward to for the remainder of the season, with the Aintree festival only around the corner. There is also some nice racing this weekend where many of the runners should be looked at with an eye on next season.

The ITV racing team are bringing us action from Kelso and Newbury, where the EBF Mares’ Novice Hurdle Series Final takes centre stage. We have taken an in-depth look at four key races this Saturday and hopefully picked some winners.

The Mick Easterby trained Albert’s Back was a decent horse on the flat and looked good when winning his starts two forays over timber. Following a lengthy layoff, he ran a fine race to finish second when not fluent at the last and given normal progression, he’ll be tough to beat.

Irish Roe was one of last season’s most improved mares starting on a mark of 120 and ending up finishing up a close sixth in the Scottish Champion Hurdle off 140. She is yet to get her head in front this season but has dropped three-pounds and she showed plenty spark when finishing third in a Grade 2 when last seen.

Harry Fry runs the talented ex-flat performer Winston C who has won his last two starts over the obstacles and f continuing to progress has to be a danger to all.

Others to consider include Champagne City, Get Out The Gate and the hat-trick seeking Ingleby Hollow.

There was a minor shock at Kelso earlier this month when Black Corton was beaten by Blue Flight. I think this form should be taken with a pinch of salt but if he continues to progress then a four-timer could very easily be on the cards. I do ahve a slight worry taht he now has to carry so much weight but other tahn that he should run well.

Calipso Collonges won his first four starts after making the move to the Olly Murphy yard. He began this season by finishing behind the much talked about Jerrysback and then proved too good for Aintree My Dream. If his hurdles mark is anything to go by then there is still room off his current ratings and will take all the beating.

Sandy Forster runs the ten-year-old Claud and Goldie who’s incredibly only had four starts under rules. He was placed behind some very smart sorts including Cubomania and Vinndication. A maiden victory at Kelso earlier this month over Knockrobin looked impressive and if he get an easy lead off a low weight, then he’ll be hard to contain.

These juvenile hurdles are always a minefield when trying to work out the form and rate of progression among these aspiring hurdlers. Paul Nicholls’ Friend Or Foe seems to be improving with each run and following good runs in France, he opened his account at the first time of askig for team Ditcheat. He’s got a pedigree for jumps and looks a type to follow.

Groveman was rated 79 when joining Jedd O’Keeffe from the Charlie Hills yard and was soon sent over hurdles, where he has run with great credit on all three occasions. Following a win on his hurdling bow, he filled the runner up spot behind two decent yardstick but will need to find further improvement to win this.

Whenever you look at a juvenile race, Alan King stands out given his legendary record with young jumpers. He seems o have another smart type on his hands in the form of Elysees. He has yet to finish out the places and just came out the wrong side of a head bobber with Quel Destin in a Grade 2 contest when last seen over hurdles. Thia is tge best form on offer although others may hold more potenial.

Others of note include The Knot Is Tied and Rose Sea Has.

Jonjo O’Neill Jr is riding on the crest of a wave having ridden his first Cheltenham festival winner last week. That win came aboard Early Doors for Joseph O’Brien but he rides for his father her on top weight Annie Mc. She was disappointing when a beaten favourite most recently and although the step up in trip should suit, I think she’ll struggle here.

The White Mouse hasn’t finished out of the first two in three starts over hurdles thus far and giver her progressive profile, she could be tough to contain.

Dan Skelton has had his string in great form at present and his Etamine Du Cochet may continue this goof form here. On the whole she has been model of cosistency barring one blip and she looks sure to be in the mix.

It won’t be shown on ITV but it has to be mentioned that Noel Fehily is having his last ride at Newbury on Saturday. Noel has been a fantastic rider down through the years and will be very missed in the weighroom. Harry Fry for whom Noel is currently stable jockey provides him with his retirement ride and the romantics among us would love to see him ride Get In The Queue to victory in the Goffs Spring Sale Bumper.