Most Expensive Horse Racing In The World 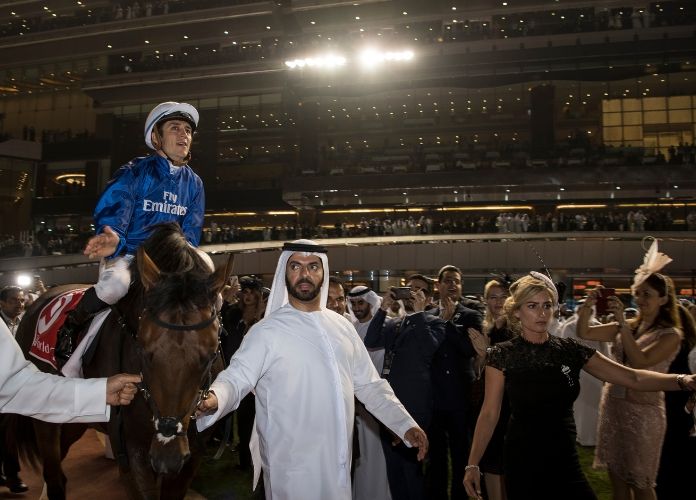 After the Pegasus World Cup adopted its new format which we will discuss later, the Dubai World Cup can now regain its position as the richest horse race in the world.

The race is run at the Meydan Racecourse in the United Arab Emirates, on the last Saturday of March each year. This Grade 1 contest has been staged annually since 1996 and marks the end of the UAE racing season.

The prize fund was boosted to $12M this year with the 2019 winner Thunder Snow taking home a cool $7.2 million for the victory. This marked a second victory in the race for Thunder Snow after he also landed the 2018 renewal and in the process gave Godolphin which is the racing stable of Dubai ruler Sheikh Mohammed bin Rashid Al Maktoum an eight victory on this contest.

This race is a real testament to its organisers as it was just a thought until discussed at the Thoroughbred Owners Conference, in January 2016. The idea was proposed by Frank Stronach, owner of the Stronach Group which owns and operates many major US racetracks. The main purpose of the race was to introduce a big-purse event that would not clash with either the Breeders’ Cup or the Dubai World Cup.

In a true non-bureaucratic manner, an agreement was quickly reached and plans for the race were officially released in May 2016. The format of the race was that 12 horses could take part with the entry fee being $1 million. Remarkedly it took just a week for all 12 slots to be purchased.

The first running of the race took place in 2017 over a nine-furlong (1⅛ miles) trip on the dirt track at Gulfstream Park, Florida and is billed as a clash for the creme de la creme of four years old or above. The inaugural winner was Arrogate who was remarkedly doing the Dubai World Cup and Dubai World Cup double.

For its second running in 2018, the prize pot was boost by $4 million to $16 million with an entry fee for each of the 12 slots of $1 million. The organizer added the rest. The winner, Gun Runner, collected an astonishing $7 million in 2018.

However, for 2019 the prize pot was split across two Grade 1 races — the Pegasus World Cup Invitational and the new Pegasus World Cup Turf Invitational over 1mile 1 and a half furlongs, which produced a great finish between Brick And Mortar and European-raider Magic Wand, with the former coming out in front.

The revamped Pegasus World Cup Invitational is now worth $9 million with $4 million going to the winner, while the turf race has a total prize fund of $7 million with the winner netting $3 million.

Entry to each race costs $500,000 with an owner scooping a bonus $1 million if they win both events.

It falls to Australia to host the world’s richest race on turf, the Everest Stakes. The race itself is for the speedsters being run over six furlongs, The Everest brings the world’s top sprinters together at Royal Randwick, Sydney. It’s only been in existence for two years but has already surpassed the Melbourne Cup as the country’s richest race.

Redzel is a very classy animal and although he’s won some other big races he will definitely be remembered for one race and that is The Everest as he has won both runnings of the race. These two victories alone have pocketed connections of Redzel nearly $12,000,000.

It’s back to the United States for another of the world’s richest races, the Breeders’ Cup Classic which undoubtedly attracts the best thoroughbreds from around the world. The winner of the race increases its owner’s bank balance by just over $3 million.

The race is restricted to three-year-olds or above, and is considered by many to unofficially be the fourth leg of the prestigious Triple Crown and is often a deciding factor in determining who claims the Horse of the Year accolade.

Uniquely, the race is held at a different location each year and has only once been hosted outside of the USA — the 1996 edition was held in Ontario, Canada.

This is arguably the biggest event in the European racing calendar and is the continent’s richest horse race. The Prix de l’Arc de Triomphe is a mile-and-a-half contest which is the ultimate test of speed and stamina for three-year-olds and above, with the winner earning $3.2 million out of a total prize pool of $5.6M.

The “Arc” has been run at Longchamp for more than 150 years and attracts some of the very best European and International raiders.

Frankie Dettori has been winning all before him this season and currently holds the record for most race wins, securing his sixth on defending champion Enable in 2018. The pair look to land a historic third victory in this historic race.

This is Japan’s richest race and is held every year at Tokyo Racecourse, with the world’s best three-year-olds or older strutting their stuff in the country’s capital. It’s an invitation contest, which is limited to 18 places.

The mile-and-a-half event was first run in 1981 and has been run every year since then. The home-contingent have excelled in the race with every winning trainer and owner coming from Japan since 2008. Almond Eye is the reigning champion, clinching $2.7 million in the process.

Most Expensive Horse Racing In The World