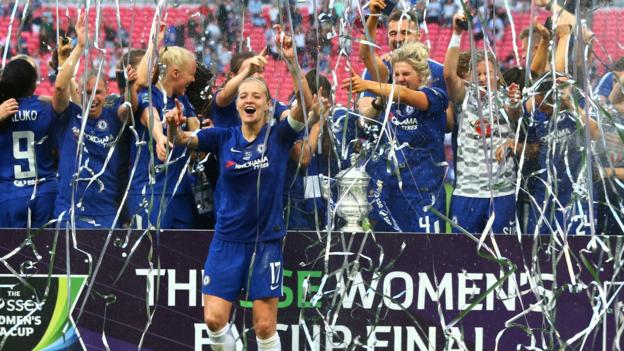 Holders Chelsea will face Arsenal in the Women's FA Cup fifth round, a repeat of the 2018 final.

Chelsea beat the 14-time winners 3-1 in front of a competition-record crowd of 45,423 at Wembley last season.

Eight of the 16 fourth-round games are still to be played after cold weather affected Sunday's scheduled fixtures.

The fifth round is scheduled for Sunday, 17 February, with fourth-tier outfit Keynsham Town the lowest-ranked side remaining.

They will face either Yeovil Town or Birmingham City should they progress from their rescheduled fourth-round tie against top-flight Reading.

Women's Super League leaders Manchester City have been drawn against second tier Tottenham Hotspur while Manchester United – who are playing in the competition for the first time since they reformed their women's team in 2018 – will travel to fellow FA Women's Championship side London Bees.

This season's final will be held at Wembley on Saturday, 4 May.