Scotland v Belgium: ‘We need to win, simple as that’ – John McGinn 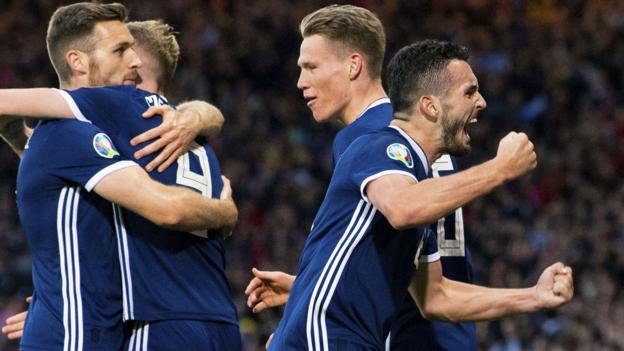 Scotland must swiftly restore self-confidence and beat Belgium at Hampden on Monday after “messing up” against Russia, says midfielder John McGinn.

The Aston Villa player opened the scoring on Friday but Russia hit back to inflict Scotland's third defeat in five Euro 2020 qualifying matches.

Belgium, number one in the Fifa world rankings, are top of Group I after five straight victories.

“It's a big task. We just know that Monday is a difficult game, and it takes on extra importance now. Russia was a must-win game and we didn't provide, so we've got a chance to resolve that.

“We just want to get to that tournament we're craving and it doesn't really matter how we get there. We need to improve and we need to do it fast.

“We need to respect Belgium but at the same time we need to believe in ourselves a lot more or we're not going to get to that tournament. We've got a talented squad and it's up to us to start showing it.”

McGinn scored his first international goal after 10 minutes at Hampden on Friday, but his joy turned sour when Russia replied through Artem Dzyuba and a Stephen O'Donnell own goal.

“I thought it was going to be a special night,” he said. “Obviously I was delighted at the time to break my duck, but after that we seemed to drop off and invite Russia on to us. That's not us.

“We proved we're a good team in the first 15 minutes, but it means nothing if you go and let a team like Russia play to their strengths. At this level you get punished for that.

“Maybe we lacked a bit of belief – that's not acceptable. We've got to believe we can go and make it 2-0 and 3-0. We know we're capable and that's the frustrating thing.

“The boys are gutted and we know we've messed up. It's so unlike all of us.

“We need to try and get the relationship together and get the best for the country. We've got to try and use how we played in the first 25 minutes and play the same on Monday.”