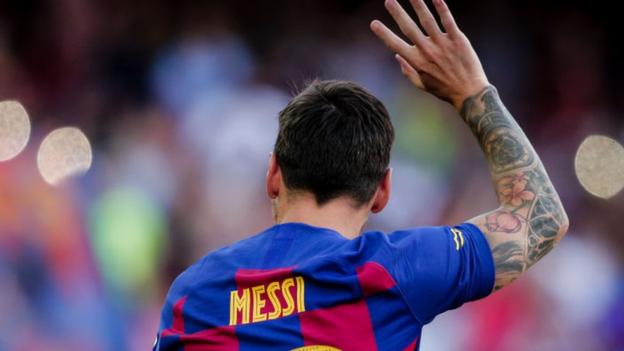 Lionel Messi will be allowed to leave Barcelona on a free transfer next summer, should the 32-year-old Argentina forward desire, owing to a clause in his contract. (El Pais, via L'Equipe)

Messi will be allowed to negotiate his future with any club from 1 January. (Marca – in Spanish)

Real Madrid will move for Paris St-Germain's French forward Kylian Mbappe, 20, next summer. The French champions warned Barcelona of Real's intentions during the clubs' failed negotiations for Neymar, 27, over the summer. (Sport – in Spanish)

Brazil international Neymar will be forced to stay at PSG unless he lowers his wage demands, says La Liga president Javier Tebas. (Mail)

Chris Smalling is ready to turn his back on Manchester United for good after the 29-year-old England defender joined Serie A side Roma on loan. (Mirror)

And United's Argentine defender Marcos Rojo, 29, is ready to push for a January move away from the club if required, with a mooted summer switch to Everton having failed to materialise. (Ole – in Spanish)

West Ham will be voting to keep the transfer window as it is – closing before the start of the Premier League season – rather than reverting to the old system and aligning it with the rest of Europe, says Hammers vice-chairman Karren Brady. (Sun)

‘No January move for Neymar'

Chelsea are set to offer Brazil-born Italy international Emerson Palmieri a new contract which will see the 25-year-old defender's current deal until 2022 extended by a year. (Gazzetta dello Sport, via Mail)

Burnley failed in a bid for 17-year-old Middlesbrough's English defender Nathan Wood in the summer but will try to sign him again in January. (Sun)

Armenia winger Henrikh Mkhitaryan, 30, is unsure if he will return to Arsenal after joining Roma on loan until the end of the season. (Sun)

Juventus have entered the race to sign Bayer Leverkusen's 20-year-old German midfielder Kai Havertz, with talks likely to begin when the clubs meet in the Champions League group stages. (Calciomercato – in Italian)

Former Liverpool youngster Bobby Duncan turned down Manchester United before the English 18-year-old accepted a move to Serie A side Fiorentina. (Mail)