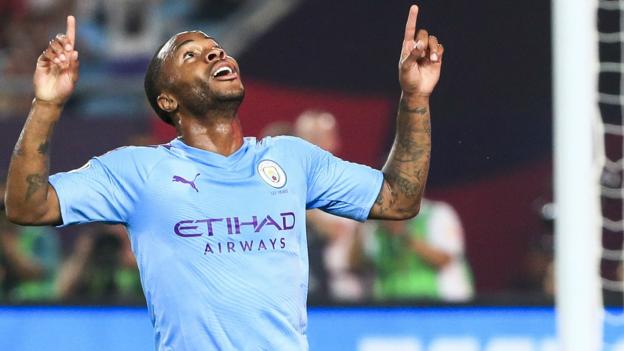 Kyle Walker expects his Manchester City team-mate Raheem Sterling to get even better under Pep Guardiola.

The England winger enjoyed arguably his best campaign for City last season, scoring 25 goals and making 15 assists as they completed the domestic treble.

In addition, the 24-year-old was voted Football Writers' Player of the Year.

“If he keeps listening and getting advice from the gaffer and takes it on board, the sky is the limit,” said Walker.

“The manager has worked with the best in (Lionel) Messi.”

Sterling received the FWA award both for his impact on the pitch and his wider contribution to the game in highlighting problems with racism.

Taking a strong, dignified stance has helped turn round the overall perception of Sterling, which was largely negative, much to Walker's incredulity.

“He definitely got bad press when it wasn't really called for,” said Walker. “He was a scapegoat and was targeted.

“I can assure you, there a lot of players who have done a lot worse than Raheem and nothing has been said about them.

“He deserves full credit to come out the other end and stay true to himself. It shows his character.”

Walker was speaking, along with team-mate John Stones, in the novel setting of a traditional Chinese fishing boat sailing across Hong Kong harbour ahead of Wednesday's tour match with local side Kitchee.

It is the start of what could be a historic season for City as they attempt to win a third consecutive Premier League titles – a feat so far only achieved by Manchester United.

Walker feels it is only through such achievements that City can be tagged a great side.

Yet, as Stones pointed out, the Blues also have Europe on their minds after failing to get past the quarter-finals of the Champions League since Guardiola took over as manager in 2016.

Winning in Europe was something former skipper Vincent Kompany told his former team-mates they must do as he was leaving to take over as manager at Anderlecht earlier this summer.

“He was massively upset that we were not successful in the Champions League and it is something that, unselfishly, he wants us to do instead.

“It's definitely in our sights. It is such a major trophy. Every season we have got one step further and made gains in the competition but it has not been good enough.

“Domestically we have been successful. We need to take that into the Champions League now.”