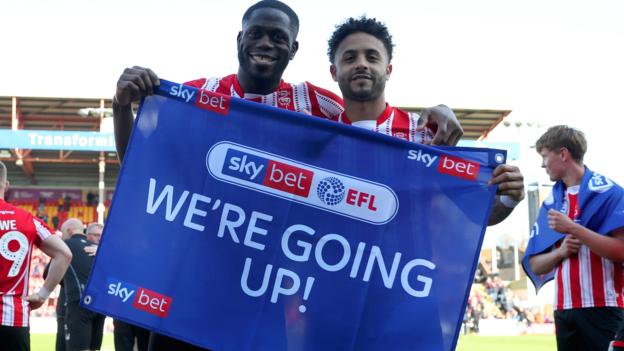 BBC Sport outlines the battles for promotion and relegation – and the race for European qualification – in England and Scotland.

Four teams will qualify automatically for next season's Champions League group stage. Liverpool and Manchester City have made sure of their places.

The fifth-placed Premier League side qualify for the Europa League group stage, as do the FA Cup winners.

Because Carabao Cup winners Manchester City have already qualified for the Champions League, the sixth-placed team will also make the Europa League, entering at the second qualifying round.

At this stage, Tottenham, Arsenal, Chelsea and Manchester United are certain of at least a Europa League spot.

The bottom three teams will be relegated to the Championship. Huddersfield Town confirmed their relegation on 30 March after a 2-0 defeat at Crystal Palace and they were joined by Fulham three days later after the Cottagers lost 4-1 at Watford.

The top two teams will be promoted to the Premier League, with the next four entering the play-offs. Norwich, Sheffield United, Leeds and Aston Villa have made sure of at least a play-off place, with West Brom close to joining them.

The bottom three teams will be relegated to League One. Ipswich Town became the first EFL side to be relegated when they drew 1-1 with Birmingham on 13 April. Bolton Wanderers joined them on 19 April after a 2-0 defeat by Aston Villa.

Rotherham will be down on Saturday if they lose against West Brom, and both Millwall and Reading pick up at least a point against Stoke and Middlesbrough respectively.

The top two teams will be promoted to the Championship, with the next four entering the play-offs. Luton, Sunderland, Barnsley, Portsmouth and Charlton are all assured of at least a play-off place.

The bottom four teams will be relegated to League Two. Bradford City were relegated on 19 April after they lost 2-0 at Coventry and other results went against them later that day. But with two games left, only five points separate the six clubs above them (AFC Wimbledon have three games remaining).

The top three teams will be promoted to League One, with the next four entering the play-offs.

Lincoln City became the first EFL team to be promoted when they drew 1-1 with Cheltenham on 13 April and they clinched the title on 22 April.

Bury, Mansfield, Milton Keynes, Forest Green and Tranmere are assured of at least a play-off place – and all five are still able to claim one of the two remaining automatic promotion spots,

The bottom two teams will be relegated to the National League. If Macclesfield beat Port Vale on Saturday, Notts County and Yeovil will be relegated if they fail to win their respective games against Grimsby and Northampton.

The National League champions will be promoted to League Two, with the next six teams entering the play-offs. Leyton Orient need at least a draw against Braintree on Saturday to be champions and secure promotion.

The fourth and seventh-placed teams will meet in the first round of the play-offs, as will the fifth and sixth-placed teams. They are joined in the semi-finals by the second and third-placed sides. The winners of the final will be promoted to the EFL.

Leyton Orient, Salford City and Solihull Moors cannot finish any lower than third, while the remaining play-off places will be taken by Wrexham, AFC Fylde, Harrogate Town and Eastleigh.

The bottom four teams will be relegated and replaced by the champions and play-off winners of the National League North and South divisions. Braintree Town were the first team to be relegated on 30 March, despite beating Gateshead 2-0, and Maidstone United joined them on 6 April after losing 2-0 to Salford City, while Aldershot Town were relegated a week later after drawing 1-1 with Hartlepool, the same day that Havant & Waterlooville went down after losing 3-2 at Solihull Moors.

Torquay United clinched the National League South title on 13 April. The North title will go to Stockport if they can match Chorley's result on the final day of the season on Saturday.

The Premiership split in half after the 33rd round of games, with the top six and the bottom six playing the other teams in their section for a fourth and final time.

The champions will enter the Champions League at the first qualifying round. The second and third-placed sides, as well as the Scottish Cup winners, will qualify for the Europa League first qualifying round. If the cup winners have already qualified for Europe through their league place, that Europa League spot will pass to the fourth-placed team.

The bottom side will be relegated to the Scottish Championship, while the 11th-placed team will face the winners of the Championship play-offs over two legs, with the losers in the second tier next season. The bottom two places are between Dundee, St Mirren and Hamilton Academical.

The champions will be promoted to the Scottish Premiership. This will be Ross County, unless they lose their last two games and Dundee United win their last two while making up an 18-goal swing in goal difference. Whoever does not win the title will enter the play-offs.

The third and fourth-placed sides (which will be Ayr United and Inverness Caledonian Thistle, who are level on points with two games left) will meet in the first round of the play-offs, with the winners playing the division's second-placed team. Whoever emerges victorious from that two-legged encounter will face the second-bottom side in the Scottish Premiership – again both home and away – with a spot in the top flight the prize.

The bottom club will be relegated to Scottish League One. The ninth-placed team will enter a play-off with three third-tier sides.

Champions Arbroath, who clinched the title after drawing 1-1 with Brechin City on 13 April, will be promoted to the Scottish Championship,

Teams finishing second, third and fourth will enter a play-off with the ninth-placed team in the second tier. Raith Rovers and Forfar Athletic are assured of their play-off spots, with the last place going to either Montrose or East Fife. Montrose can clinch it if they win on Saturday, or East Fife fail to win.

The bottom club will be relegated to Scottish League Two, while the ninth-placed side will enter a play-off with three fourth-tier teams. Stenhousemuir and Brechin City are guaranteed to finish in the bottom two.

The champions – Peterhead or Clyde – will be promoted to Scottish League One. Peterhead will clinch the title if they match Clyde's result next Saturday.

Whoever does not win the title will enter the play-offs with Edinburgh City, Annan Athletic and the ninth-placed League One team.

The team finishing bottom – which will be Berwick Rangers unless they beat Albion Rovers in their penultimate game on Saturday – will enter a play-off (on 11 and 18 May) against the winner of a play-off between Lowland League champions East Kilbride and Highland League champions Cove Rangers (who meet on 27 April and 4 May) – for the final place in League Two for the 2019-20 campaign.