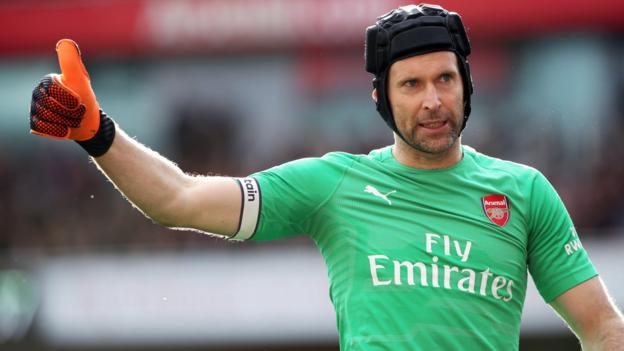 Arsenal keeper Petr Cech is to retire at the end of the season.

The 36-year-old joined Arsenal in June 2015 from the club's London rivals Chelsea, where he spent 11 years.

“Having played 15 years in the Premier League and won every single trophy possible, I feel like I have achieved everything I set out to achieve,” said the ex-Czech Republic international.

“”I will continue to work hard at Arsenal to hopefully win one more trophy this season.””

Cech's career was in doubt in October 2006 when he required surgery for a skull fracture after a collision with Reading's Stephen Hunt.

The keeper was out for three months and has since worn a protective headguard during games.

He added: “This is my 20th season as a professional player and it has been 20 years since I signed my first professional contract, so it feels like the right time to announce that I will retire.

“I am looking forward to seeing what life holds for me off the pitch.”

If you are viewing this page on the BBC News app please click here to vote.

‘A champion on and off the pitch'

Cech arrived in England when he was signed by Chelsea from French club Rennes in July 2004.

He went on to win 13 trophies with the Stamford Bridge club, including one Champions League and four Premier League titles.

He also set a club record of 228 clean sheets in all competitions, beating the previous mark of 208 set by former England international Peter Bonetti between 1960 and 1979.

Cech eventually lost his place to Belgian Thibaut Courtois before joining Arsenal and helping the Gunners win the FA Cup in 2017.

“For your consummate professionalism, for being the perfect role model, for the 50 clean sheets, for your honesty, your integrity and for your inspiring work with the Arsenal Foundation, we want to say – thank you Petr Cech,” tweeted Arsenal.

In a statement on their website, the club added: “Petr recently informed us of his decision. Like all football fans, we are sad about this, but completely understand and support Petr.”

“A champion on and off the pitch,” said a message from Chelsea. “Enjoy your retirement.”

Cech started this season as Arsenal first choice keeper but has since lost his place to Bernd Leno.

The Czech has made 12 appearances for the Gunners this season, with his most recent coming when he started in the FA Cup third round win at Blackpool.

Cech has also played in Europa League and League Cup games, but has not played in the league since going off injured in the win over Watford on 29 September.

Arsenal, who are fifth in the Premier League, host fourth-placed Chelsea in the top flight on Saturday.

Cech's main chances of adding to his trophy haul appear to be in the FA Cup and Europa League.

The Gunners play Manchester United in the next round of the FA Cup, with the competition's final on 19 May – the day before Cech turns 37.

Arsenal play BATE Borisov in the next round of the Europa League, with the final of that competition on 29 May.

Petr Cech's retirement will see the curtain come down on the career of one of the most significant and successful figures of the Premier League era.

The Czech goalkeeper was part of the spine of Chelsea's golden years under the likes of Jose Mourinho, Carlo Ancelotti and then most spectacularly of all when, with interim manager Roberto di Matteo in charge, he was the hero of the Champions League final win against Bayern Munich on penalties in their own AllianzArena in 2012.

Cech won every major trophy at Chelsea, 13 in all, and also showed the courage to return from a serious head injury sustained in a collision with Reading's Stephen Hunt in October 2006 that has seen him wear his trademark skullcap for the remainder of his career in a position where bravery is a pre-requisite.

He is a keeper and character who exudes calm authority, a figure of reliability and stability in an era, especially at Chelsea, when change on and off the field was often frequent.

Cech moved to Arsenal from Chelsea in summer 2015 with owner Roman Abramovich's personal blessing after his years of outstanding service.

The 36-year-old has also emerged as a distinguished figure off the field, with his class and dignity making him a hugely respected individual by everyone inside the game.